SOURCE: ALL ABOUT JAZZ PUBLICITY
June 16, 2008
Sign in to view read count 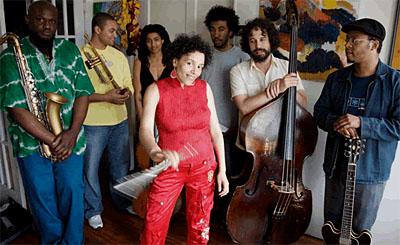 On Thursday, June 19 at 7:30pm at Columbia College's Music Hall (1014 S. Michigan), Nicole Mitchell and her Black Earth Ensemble will converge with like-minded artists Margaret Morris (choreographer/solo dance), Krista Franklin (visual art) and Floyd Webb (experimental video) to create a unique multi-arts evening inspired by the visionary work of science fiction writer Octavia Butler. The event, which celebrates Mitchell's new CD release “Xenogenesis Suite" on Firehouse 12 Records, also includes an educational panel discussion as well as the performance and exhibition, and will raise awareness about the depth of artists' conceptual work and their creative processes. The event is free to the public with limited seating available. Tickets will be available beginning at 6:00pm at the performance venue.

“Xenogenesis: A Multi-Arts Exploration" will give the opportunity for diverse audiences to come together that are interested in science fiction, original music, experimental video, visual art, dance and African American culture.

“A compelling improviser of wit, determination, positivity, and tremendous talent..." (Peter Margasak, Chicago Reader), Nicole Mitchell is a creative flutist, composer and bandleader. A member of the Chicago Sinfonietta, Mitchell is the founder of the critically acclaimed Black Earth Ensemble and Black Earth Strings, with five recordings as leader. Mitchell's artistic intent is to provoke audiences with visionary work that forms a synthesis between the real and the imagined, the familiar and the unknown. Her compositions reach across sound worlds, integrating new ideas with moments in the legacy of jazz, gospel, pop, and African music to create synthesis of “multi-directional music." Mitchell has been a highlight at art venues, festivals throughout Europe, the U.S. and Canada. Having performed with luminary musicians including George Lewis, Lori Freedman, Bill Dixon and Muhal Richard Abrams, Mitchell also works in ongoing projects with Anthony Braxton, Rob Mazurek, Ed Wilkerson and Hamid Drake. Mitchell is currently Co-President of the Association for the Advancement of Creative Musicians (AACM), and has been a winner of awards and commissions including: Downbeat magazine's #1 Rising Star Flutist 2005-2007, Chicago Tribune's “Chicagoan of the Year 2006," and Illinois Arts Council Fellowship in Music Composition (2005, 2002).

In 2007, Krista Franklin was awarded a Community Arts Assistance Program grant from the City of Chicago Department of Cultural Affairs and Illinois Arts Council, a state agency for Seed (The Book of Eve), her Artist Book inspired by the novels of Ms. Butler. Franklin's poetry and mixed media collages have been widely published nationally and internationally in such publications as Clam, Callaloo, and Warpland, as well as in the anthologies Bum Rush the Page: a def poetry jam and Gathering Ground. She has exhibited in solo and group shows in Chicago, Minneapolis and Iowa, and her art has been featured on the covers of award-winning poetry manuscripts such as leadbelly by Tyehimba Jess (Wave Books, 2005), and Gravity U.S.A. by Jacqueline Jones LaMon (Quercus Review Press, 2006).

Dance artist, Margaret Morris has been deeply engaged in her creative processes since receiving her BFA from Columbia College Chicago in 2005. She has been a Linkup artist in Links Halls' residency program where she premiered In Tongues in '06, a mentee of Shirley Mordine of Mo&Co where she created a solo entitled popcorn dream with stars on Szewai Lee, a DanceWebber at ImpulsTanz with the support of the Illinois Arts Council, and has enjoyed the distinct honor of working as a Chicago Dancemakers Forum Lab Artist. After processing for over a year with CDF's support, she premiered her first full evening length piece of contemporary dance, Laying of Hands ('07). Margaret recently enjoyed collaborating with CDF Lab Artists Julia Mayer and Ayako Kato within their explorations and excavations. In addition to generous support from the CDF, Margaret has been able to continue her dance-making with financial support from Chicago's Department of Cultural Affairs, Richard H. Driehaus Foundation, Yellow Fox Foundation, Puffin Foundation, and Weaselfund. Margaret's work has appeared at venues throughout Chicago including Links Hall, Spareroom, The Chicago Cultural Center, and Galaxie Chicago, as well as Wayne State University, and the University of Wisconson. She is delighted to be working with Nicole Mitchell on the Xenogenesis Suite.

Filmmaker Floyd Webb's background includes global work in cinema, photojournalism, publishing and advertising. After a ten year career as a photojournalist, Floyd was the founder and creative director of the Blacklight Festival of International Black Cinema (1984-1995). Webb was an associate producer of the award-wining Julie Dash film, Daughters of the Dust (1992). Floyd has worked with filmmakers such as John Akomfrah, St. Clair Bourne, Julie Dash, Jean Pierre Bekolo and Spike Lee doing research and production work on documentary, drama and short films. He has lectured on African American Cinema History at the School of the Art Institute of Chicago, the London School of Printing and the has been a panelist at Sundance.