BJURecords to Release "From Now On" from Guitarist/Composer Oscar Penas 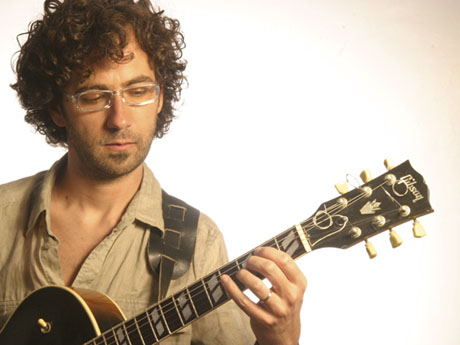 “Oscar's music is inviting and from the soul; finely cultivated and fully realized...his writing and playing have beautiful motion and uniquely sensuous melodies."- Esperanza Spalding

“Oscar Peñas has found a way to merge traditional Spanish music with Jazz in a way that seems totally natural and fresh. The songs sound familiar and are totally welcoming. He also recorded them in a natural way, without overproducing them, and allowed himself and the players carte blanche to find their own personalities within the music. A rare quality for records that are produced today and makes it unique and refreshing for all listeners." —Gil Goldstein

On August 30, 2011, Brooklyn Jazz Underground Records (www.BJURecords.com) will release the third recording, From Now On, from guitarist/composer Oscar Peñas. Utilizing a multi- cultural band with members from the U.S., Japan and Argentina, Peñas delivers an album of music that he is very attached to, as it truly defines who he is as a Barcelona-born/Brooklyn- based composer and improviser. Paradoxically, Peñas feels that he had to be removed geographically from his native Spain to compose the music for From Now On. The recording is many things, but it is predominantly Peñas' personal and heartfelt reflection on his cultural heritage.

Nylon string guitar was Peñas' first instrument and he uses it again here to great effect, incorporating a dexterous finger picking style from his formative classical training. This technique combines with hints of Iberian music and memories of flamenco, informing the compositions, but never pretending to be faithful to any particular style or palo (sub-genre of flamenco). This influence is most profound on the title track, “From Now On" (featuring Gil Goldstein and Franco Pinna), and also on Encuentro, the oldest composition on the album, from the late nineties.

Spanish music and contemporary jazz are not the only influences on Peñas' writing. Brazilian music was love at first sight for the guitarist, and remains a strong influence on his music. This infatuation is clearly evident when listening to “Choro n.1 (Guinga)"dedicated to the great guitarist/composer from Rio de Janeiro, and “Choro n.2 (Corpo)," a composition that Peñas wrote immediately after attending an outstanding dance performance at BAM (Brooklyn Academy of Music) by the Brazilian Corpo Dance Company that blew his mind.

Argentinean music and Cuban filin are the other strong influences in Peñas' compositions for this album. Samuel Smith,named after a British beer, is his way to pay tribute to an “Argentinean mood," expressed in a recurrent ostinato. Julia, dedicated to the memory of Oscar's late cousin, is an optimistic kind of bolero that simply celebrates life.

Listening to the lyrical, solo-less, last track of the album, Adéu ("goodbye" in Catalan), one could never mistake where Oscar Peñas is from, and where he is now.

Oscar Peñas on the musicians found on From Now On: (It was a very meditated process of choosing the right musicians for Oscar's writing)

Dan Blake on tenor and soprano saxophones has the perfect balance of freedom, tradition and a rich tone. Before recording the album he played these songs for about two years in many different contexts and venues.

Richie Barshay not only plays drums, you can hear him playing cajón and pandeiro. He has a deep knowledge of jazz, Brazilian music and different South American genres and his open approach to the instrument is extremely subtle and tasteful, every single note is supportive and has a meaning and a reason. Richie is an orchestral player, a poet of the groove.

Moto Fukushima is a virtuoso of the six-string electric bass, his sound blends perfectly with the acoustic guitar and he has a very special sensitivity in playing harmonies and complementing each other. He also has a very unique and motivic approach to improvisation.

Two very special guests complete the album: Franco Pinna, who I have known since 1997, is the drummer in my working trio, plays bombo legüero, a traditional Argentinean instrument made of wood and cured cow skin, on the title track of the album that is a Spanish flavored tanguillo.

Before meeting Gil Goldstein in the studio, where we talked about paella and squid in their own ink, I knew him for his recordings with jazz giants like Miles, Gil Evans, and Jaco and Metheny from the seventies (my favorite decade in aesthetic terms). I also knew him because of his knowledge of Spanish music through his collaborations with my compatriots Carles Benavent and Jorge Pardo, two pioneers who merged jazz with flamenco.