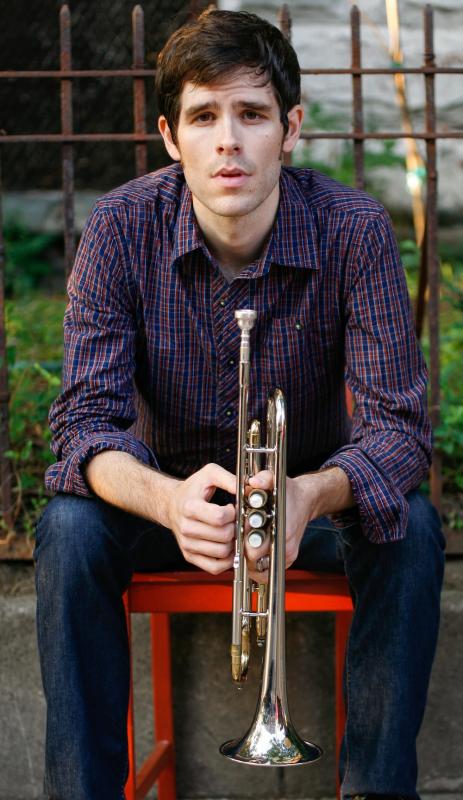 “Trumpeter Matt Holman is a creative and thoughtful improviser with a world-class sound. I expect big things from him in the years to come." —Fred Hersch, pianist/composer

“There are many prodigiously talented young instrumentalists out there. The ones with something to say - and a clear idea of how to say it - are altogether thinner on the ground. Matt Holman's strikingly beautiful debut speaks with intelligence, focus, and conviction." —Darcy James Argue, composer/bandleader

“Matt Holman is a trumpeter and composer with a fresh, lyrical voice. Like his music, Matt is warm, caring, and quietly passionate." —Pat Harbison, trumpeter/educator

The title track of Matt Holman's debut recording, “When Flooded", is a nod to Holman's home state of Arizona, and a common road sign there that warns, “Do Not Enter When Flooded". He explains, “it refers to the summer flash floods so common in the area. The first three words had faded on this particular sign, leaving open a world of interpretive possibility. I thought of what a flood can mean in a desert landscape like Arizona, and how much this idea is reflective of the creative process. I also thought about how the effects of a flood can be felt for so long after the waters have receded, something which became painfully affirmed in the wake of Hurricane Sandy. For this piece, I had a great flowing of counterpoint ideas. It is highly organized with short bursts of intense improvisation that reflects the desire we all have at times to break out from systemization into a world of free expression."

The Brooklyn, New York based trumpeter/composer/educator Matt Holman is an artist that has found his world of free expression and creativity, and has been recognized by his peers by being a prized sideman for the likes of Fred Hersch, Kurt Elling, Darcy James Argue (featured on Argue's most recent recording, Brooklyn Babylon), Jon Gordon, Kate McGarry, Matt Ulery, Bob Newhart, Los Amigos Invisibles and The Gregory Brothers. He has also earned national and international performance awards from DownBeat Magazine, the International Trumpet Guild's Jazz Improvisation Competition, the Carmine Caruso International Jazz Trumpet Solo Competition and the National Trumpet Competition. As a member of The BMI Jazz Composers Workshop, Holman most recently won the 13th annual BMI Foundation's Charlie Parker Jazz Composition Prize, and will compose a new work for the Manny Albam Commission in June 2013. Taking inspiration from such diverse influences as Wayne Shorter, Dmitri Shostakovich, and Sigur Ros, Holman has composed works for Marvin Stamm, Ed Soph, David Baker, Marie Speziale, and The National Conservatory of Costa Rica, and was a 2009 ASCAP Young Jazz Composer's Competition winner.

In addition to Darcy James Argue's Secret Society, Holman is an integral part of many of NYC's finest large ensembles/big bands, a genre that is seeing a strong resurgence of late. He is featured on composer Asuka Kakitani's new recording, Bloom (19/8 Records), and also performs with Andrew Rathburn's Large Ensemble, JC Sanford Orchestra, Nathan Parker Smith Large Ensemble and the Noriko Ueda Jazz Orchestra (coincidentally, Darcy, Asuka, Nathan, and Noriko are all previous winners of the BMI Composer's Award). Holman is the artistic director of the New York Youth Symphony Jazz Band.

About the music on When Flooded:

When Flooded opens with “Kindred Spirits", a tune that “came to me shortly after I re-met an old acquaintance after many years of no communication (she is now my wife!)," said Holman. He explains the tune further; “the form and development of musical material throughout came to me during a compositional meditation. What gets achieved is a musical experience that feels much like a relationship with a like-minded friend - honest, balanced and free, yet supported. The two improvisations (trumpet and clarinet) signify individuality within the context of the greater whole of a connected relationship." “Tutti" is up next, an original composition inspired by the master, Ornette Coleman, and his, “harmolodic musical philosophy where harmony, melody, speed, and rhythm are equal to each other yet ultimately dependent on the musician's range of expression," explained Holman. The robust “Chain of Command" was inspired by the TV show, The Wire, and reflects the farce that often comes of authority and power in a hierarchical organization. This is expressed with a section of collective improvisation that blurs the line of who is in charge and it is up to the listener to decide who is at the top and who at the bottom of the musical food chain." “Tandem" is an intimate song that connects two-part music in a way that is highly organized but also allows for a loose creativity to shine through. “The instruments are often coupled throughout and rely on each other to determine the direction of when and how the music is played," said Holman.

Other highlights on When Flooded are: “Earworm", “a mysterious tune that evokes real creeping, crawling life forms, (try turning out the lights and listening!), and uses a twelve tone pitch row in all of the written material that still penetrates the ear in a memorable way. While composing this piece I was inspired by the Dave Douglas composition “Bardot" from a live recording of his Tiny Bell Trio"; “Between" is about being in limbo, vulnerable, and contrastingly, pushing towards the next thing in life and being content in the moment; “Where the Tracks End" is inspired by a re-occurring dream that Holman has. “I have a hazy black-and white image of an abandoned railroad track out in the lush countryside and I wonder where it comes from and where it might be going. This piece uses only two melodic ideas in counterpoint to reflect the two rails of a track. In my dream, since there is no beginning and no end to the tracks, the melodic parts of the piece just stand as a musical image, bookshelved by a cajón groove"; and the album's closer, “Syndrome", “which was the final piece written for this recording. I was interested in having a short, through-composed piece that uses only one melodic phrase as the entire basis for the composition - harmonically, melodically, and rhythmically. There is a familiar formal narrative in art of starting small, developing and reaching a climax, and coming back home again. I imitate this typical formal structure, the composer's 'syndrome,' - but hopefully in my own unique way".

Although Matt Holman is well versed in the standard jazz repertoire, most of his creative endeavors revolve around his original music and music composed by his peers. When Flooded features nine of Holman's gems that are overflowing with harmonic/melodic sophistication and beauty, abundant rhythmic variety, collective improvisation, and a high level of imaginative extemporization from all of the musicians. When Flooded is an auspicious debut, it is an album of such depth that it warrants numerous listens, and it brings to our attention an artist that has all of the attributes of a musician destined for an illustrious career.