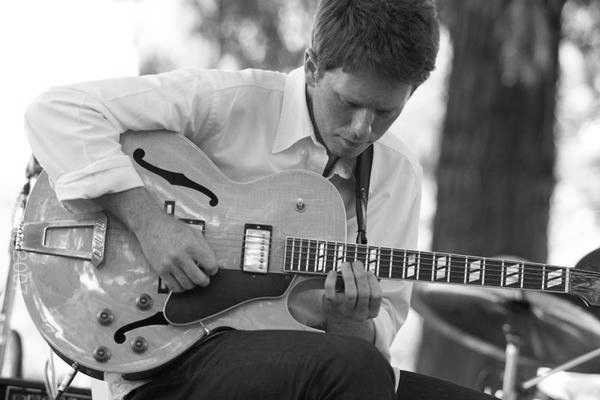 Brooklyn Jazz Underground Records proudly announces the release of the Perry Smith Quartet - Street Sense, the new recording from guitarist/composer Perry Smith. Street Sense, from the California-born, Brooklyn-based artist, was inspired and influenced by simplicity, repetition, melody, spontaneous interaction, and space. Smith explains, “to highlight these concepts I brought on board Dayna Stephens (saxophone), Sam Minaie (bass) and Ross Pederson (drums). I'm very grateful to these incredible musicians who helped me bring this music and these concepts to life. The end result represents a foundation rooted in jazz tradition combined with an artistic drive to create a fresh identity within the art of jazz."

Street Sense opens with “Mr. R.A. The Warrior", inspired by the great artist and teacher, Mr. Ralph Alessi, whom Smith studied composition with when he first moved to New York in 2009. “He often talked about the importance of 'repetition', and I used that as a compositional tool to write this song. I found a melody and harmony that I could effectively repeat and develop at the same time," said Smith.

Next up is the title track, “Street Sense" which epitomizes and embodies the concept of this recording. Smith explains, “the title of this song was inspired by my initial reaction to the climate of 'sessioning' with other jazz musicians in New York. When I arrived, I was consistently blown away by the collective ability of musicians to improvise at such a high level. However, I often felt that some of the original music was technically difficult but conceptually easy to improvise on. This created a dynamic where fellow musicians focused more on their technique than on their concept. Therefore, I was inspired to write something that was the reverse: 'technically easy but conceptually challenging,' which led me to write a simple and repetitive melody at an easy tempo with odd phrases, modern harmony, dynamics, long solo form, rhythmic hits and multiple sections. I received great feedback from players about this song, and it has inspired the concept for my entire album."

“The Searcher" is next, one of the prettiest tunes on the album, liberally peppered with lush chords that truly display Smith's stunning sound, Dayna Stephen's demonstrative voice on tenor saxophone and Minaie's and Pederson's impeccable taste and discernment. For Smith, this composition aims to be reminiscent of, and create the same emotional effect of soulful music that conjures up feelings of nostalgia.

The concepts of simplicity, repetition and melody continue in fine fashion on “Please Repeat After Me", a tune that finds the band really digging in on the thematic melody and the rock inspired groove, spurred on by Stephen's inspired solo, and Smith's own exploratory, stirring solo.

“Talking Points", develops on the theme of Street Sense. “I wanted to write a song in 5/4 time that had a more unpredictable, but still simply, melody. When seeing the notes written on the page, I equated them to points on a map. Understanding that music is a language I came up with the title, explained Smith.

“Open Spaces" is about Smith's love of wide open spaces, and while on a hike one day this simple title came to him. “I wanted the music to reflect that relaxed and grand feeling of being outdoors in open spaces so naturally I wanted the song to be a ballad. In an attempt to mirror the grand beauty and variety that nature possesses, I made sure the melody had a big range and allowed for large dynamic shifts."

Closing the album is the rollicking “Happy Jungle", Smith's homage to New York City, and a nod to Street Sense, which is his first recording as a full-fledged New Yorker. He explains, “the urban “jungle" in which I live is certainly a crazy place, but with the right attitude and wherewithal it can be a wonderful and happy place to live. To show this musically, I focused on writing a happy and catchy melody in a major mode, at a brisk 7/4 tempo. The free intro represents the uncertain and timid nature that us fresh New Yorkers experience when we first arrive."

With Street Sense guitarist/composer Perry Smith has created an album of sublime beauty, soaring melodies, engrossing improvisation and rhythmic thrills. Certainly one not to be missed from this burgeoning new talent on the scene.

In 2005 he received his Bachelor of Music degree from the Flora L. Thornton School of Music at the University of Southern California, where he studied guitar with jazz legend Joe Diorio. In 2011 he completed his Masters in Music at New York University and was named the “Outstanding Graduate" in the Jazz Department.