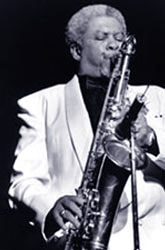 NEW YORK, NY: Jazz icons, friends and dedicated fans will Frank Fostercome together to pay tribute to jazz giant Frank Foster, at a Birthday Memorial Celebration on Friday, September 23, at 6:00 pm, at the historic Abyssinian Baptist Church, 132 Odell Clark Place (formerly West 138th Street) in Harlem. On what would have been Dr. Foster's 83rd birthday, the public is invited to celebrate the life and music of the renowned saxophonist, composer, arranger, bandleader and educator. The service will be officiated by Abyssinian's Pastor, the Rev. Dr. Calvin O. Butts, III.

“Fos' pride and joy were his own New York-based bands, the 10-piece Swing Plus and the 16-piece The Loud Minority, “ said Cecilia Foster, his wife, partner, best friend and manager for 50 years.

With hundreds of scores to his name, some of Foster's most notable compositions include Shiny Stockings, Blues in Hoss' Flat (originally Blues in Frankie's Flat), Cecilia Is Love, Four, Five, Six, Back to the Apple, Little Chicago Fire, Blues Backstage, Down for the Count, Someone's Rocking My Jazz Boat, Simone, Manhattan Fever, The Hampton Strut, Ode to Joe Newman, Shihtsu-Mon, Come On In and Yo Recuerdo A Mi Hermano Tito (dedicated to Tito Puente).

Dr. Foster never failed to encourage, educate and provide opportunities to all musicians. He taught at many institutions across the country including Jazzmobile, Rutgers University, The State University of New York at Buffalo, New York University, The New School and New England Conservatory of Music.

A member of the American Society of Composers, Authors and Publishers (ASCAP), Foster was honored on its 2006 Jazz Wall of Fame. Also recognized by the National Association of Recording Arts and Sciences, he was nominated for a Grammy Award in 1984 and won twice for arrangements in 1987 for Diane Schuur and the Count Basie Orchestra and again in 1991 for George Benson and the Count Basie Orchestra. Foster produced soundtracks for Woody Allen's Hannah and Her Sisters, Jerry Lewis' The Errand Boy and Spike Lee's Mo' Better Blues. In 2002, Foster was named a National Endowment for the Arts Jazz Master; in 2009, he was awarded the BNY Mellon Jazz Living Legacy Award. In addition, he was awarded honorary degrees from his alma mater, Central State University (Ohio), 1983; College of St. Rose (New York), 1993; and Old Dominion University (Virginia), 2009. Dr. Foster's music and papers will be archived at Duke University in Raleigh, North Carolina.

Born September 23, 1928, in Cincinnati, Ohio, Frank Benjamin Foster, III began his musical career at age 11, recognized, encouraged and supported by his middle-class parents. For most of his long career, his home was Scarsdale, New York, with his wife Cecilia, son Frank IV and daughter Andrea Jardis. With his first wife Vivian Wilson, he also had two sons, Anthony K. Foster and Donald B. Foster, both of California.

In February 1998, the Fosters moved to Chesapeake, Virginia. In March 2001, Dr. Foster suffered a stroke that left him unable to play the saxophone, but he continued to compose, arrange and teach. On July 26, 2011, at the age of 82, Dr. Foster passed away at home.

Memorial donations can be made to the Jazz Foundation of America, 322 West 48th Street, 6th Floor New York, NY 10036. For more information on the organization, visit jazzfoundation.org.

For information and directions to The Abyssinian Baptist Church, visit abyssinian.org. To reach the Church by public transportation, take the 2, 3, B, C trains to 135th Street or M2 and M7 buses.