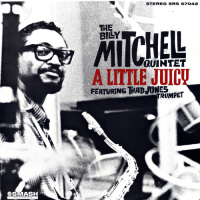 It's a disgrace that many of Billy Mitchell's leadership albums aren't available on CD or by download. Mitchell was a tenor saxophonist of extraordinary power and skill, and yet today he's virtually unknown. Many jazz musicians had the misfortune of recording for labels in the 1960s and '70s that were so small that the master tapes were lost, erased or misplaced. In the case of Michell, several of his most important recordings were for Xanadu. Sadly, many of the label's master tapes were stored in New York and damaged or destroyed during Hurricane Sandy in 2012.

Two of Mitchell's best albums as a soloist were A Little Juicy and The Colossus of Detroit. The former was recorded in 1963 for Smash, a subsidiary of Mercury Records founded in 1961 by Mercury executives. Where the Smash masters are is anyone's guess.

The Thad Jones/Mel Lewis Orchestra was still two years off, and Jones recorded frequently as a sideman during this period. When you hear Mitchell and Jones together, you're going to wish they had recorded several other albums like this.

The Colossus of Detroit is the edgier album of the two. By 1978, Mitchell had an more muscular tone that reminds me of Joe Henderson and Sonny Rollins—smokey, eel-like and full of force and conviction. The trio behind Mitchell featured Barry Harris (p), Sam Jones (b) and Walter Bolden (d).

Interestingly, the first song on Colossus is Recorda-Me by Henderson. Four standards follow—I Had the Craziest Dream, I Should Care, Unforgettable and How Am I to Know. The final song is Fats Domino's blues Be My Guest. Mitchell approached the standards like a singer, fully conscious of the lyric and eager to tell you a story with his saxophone. The album, in many ways, belongs to Mitchell and Harris, since the bop pianist is given wide solo room.

Hopefully, after this post, someone here or abroad will reissue Billy Mitchell's leadership dates, including the two covered in this post along with This Is Billy Mitchell, Warming Up (a Dave Burns leadership sessiion), De Lawd's Blues and Night Flight to Dakar and Xanadu in Africa, with Al Cohn. They're sensational.

JazzWax tracks: Both of these albums are extremely rare. I found a Japanese pressing of A Little Juicy on eBay for $60 and a sealed Xanadu original pressing of Colossus of Detroit for $29 (attention Zev Feldman).

JazzWax clips: Here's A Little Juicy in its entirety...

Here's Recorda-me from Colossus of Detroit...

And here's I Should Care...