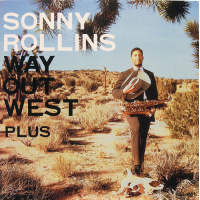 slideshow
A couple of weeks ago, Billy Collins sent me an unpublished poem. Billy is a former U.S. Poet Laureate (2001-2003) and author most recently of The Rain in Portugal (Random House). His poems always have a jazz feel—improvised, deft and witty. Between the December holidays, Billy wrote a poem about Sonny Rollins. Before we get to his verse, here's a note Billy sent along with background:

“The poem began on a morning walk/run that I'm in the habit of taking on a sandy path that runs around a lake here in Florida. I had my earbuds plugged in, and I happened to be listening to Sonny Rollins's Way Out West. The album—if we can still use that word—with its amazing photo of Sonny on the cover in a 10-gallon hat and a giant cactus in the background, is a favorite of mine, as is Rollins himself. [Photo above of Billy Collins by Bill Hayes]

“To make a poem out of this, you just have to add the self-aggrandizing fantasy of imagining you are playing rather than just listening. Don't millions of commuters “become" Elton John or Emily Lou Harris as they sing along on the drive to work? As I wrote the poem, I had to add the disappointing fact that I am me, not Sonny Rollins. So that's how the poem came about; I started thinking about it on my walk and composed it as soon as I got back home. I've never seen Sonny play alas, but he has been one of my jazz gods."

One of the dangers of piping Sonny Rollins
into my earbuds on my morning outing
is that I start wishing that I were Sonny Rollins
as I face again the blunt fact that I am not.

I usually run along a curvy cinder path
on the edge of a lake that sparkles in the sun.
I spot a heron, a pair of ducks and 5 white ibises,
but the fact remains that I am still not Sonny Rollins.

I watch hundreds of scattered black birds
wheeling and squawking in the sky
but that cowbell intro to “I’m an Old Cow Hand”
reminds me that I am someone other than Sonny Rollins.

Most of the runners and dog walkers
give me some kind of morning greeting.
Then a guy about my age shoots me a look
that says There’s no way you are Sonny Rollins.

That does it. If I am not Sonny Rollins,
then none of you other people are either.
Not you in the track suit or you with the collie—
not one Sonny Rollins in the pack of you.

And so I began exercising the muscles
of sarcasm as I continued to put down
everyone in sight for being inferior
to Sonny Rollins and every other jazz giant,

a pointless habit that ended only
when I found you at home in the kitchen,
you who have no desire to be Sonny Rollins,
you who dream only of being Anita O’Day.

JazzWax note: A reissue of Sonny Rollins's Way Out West (1957) is due in a couple of weeks. More on the new release when I review it.