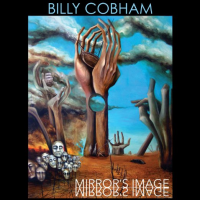 slideshow
Los Angeles, CA – Much to the excitement of drummers and jazz aficionados worldwide, drum legend Billy Cobham will be releasing two live albums on Cleopatra Records. The first is Mirror's Image on February 17 (CD & VINYL), followed by Reflected Journey on April 28 (CD). The albums are two parts of the same show recorded in Tokyo on February 15, 1992

What an amazing career Billy Cobham has had. From his auspicious start in the late '60s touring and recording with the great Miles Davis to his groundbreaking work with John McLaughlin and the Mahavishnu Orchestra in the early '70s, Cobham built a reputation for complex and soulful drumming. But it wasn't until 1973 and the release of his first solo album 'Spectrum' that he took the title of jazz fusion's preeminent drummer with a style and technique all his own, one that has been a major influence on drummers worldwide ever since.

A stream of further albums would follow, both under his own name and in partnership with a host of allies. And each one pushed towards fresh frontiers as Cobham marched on through the 1970s and 1980s. He played with Jack Bruce, Mark-Almond, a revived Mahavishnu, Bob Weir and the Grateful Dead, and was even behind a Dead tribute band, Jazz is Dead, realigning the sound of the Dead for a whole new audience. Cobham's own band, Glass Menagerie, cut two truly luminous albums, and as a new decade, the 1990s, dawned, the drummer was as busy as he had ever been.

In 1992, working under the auspices of UNICEF, Cobham set out for Brazil, where he would be working with autistic outpatients and street children in Santos, a suburb of Sao Paulo. “The street children fell into my realm of operations almost by chance, as it was not part of my original mandate,” he explained. “But due to the unavoidable specter and shadow cast by so many little personalities with big hearts and so much time to ponder life without parental direction, it was inevitable that I would find myself working with them… some of the brightest minds harboring raw talent that I have ever witnessed to date. The shame of it all was that many would never have the opportunity to use their gift.”

A new project came into being, a band in which the voices and talents of the street children would be harnessed alongside the talents of Cobham's latest combo, the visionary trio that he put together with the then all-but unknown Ira Coleman on double bass; and Australian Joe Chindamo on piano. This was the grouping captured together on 1993's so-acclaimed 'Traveler' album. But another song informed by the Brazilian sojourn, “Street Urchin,” found its way onto 1992's 'By Design', and it was with that album fresh on the shelves that the trio set out on tour.

February 1992 saw Cobham, Coleman and Chindamo arrive in Japan, and it was there, in Tokyo on February 15, that they performed the breathtaking show from which these two albums have been drawn. Japanese audiences, says Cobham, are among his favorite in the world, and the feeling was clearly mutual. The audience's enthusiasm never lapses, and he rewarded them with a selection of songs that traveled back across his entire career - “Crescent Sun,” reaching all the way back to 1974's sophomore effort, 'Total Eclipse'; “Shabazz,” from the 1975 album of the same name.

The evening also looked towards the future - “Reflected Journey,” a magnificent piece that would later title one of Chindamo’s own solo albums; “Prime Time,” “Key Jane”…. And all of them reworked and rearranged for the demands of the night, and the skills of the three piece. On record, Cobham habitually introduced fresh players, fresh instrumentation, and allowed their interpretations to flavor the individual compositions. In concert, whole new rearrangements were called for, and it was a mark of the talents with which he surrounded himself that every fresh revision felt somehow definitive; every one opened new doors through which the improvisations could stroll. Tonight in Tokyo, those doors were open as wide as they have ever been.

Cobham remembers the night, hot and tight before one of his favorite audiences in the world. His latest album, 'By Design', was still fresh on the shelves and of course it would dominate the show, the epic “Mirror's Image,” the raucous “Street Urchin” and the playful “Kinky Dee” taking off from the CD for fresh destinations unknown. On record, Ernie Watts' sax was an integral part of the show; on stage, the trio moved in fresh directions and the music soared accordingly.