Bill Warfield And The Hell's Kitchen Funk Orchestra At The Keystone Korner Baltimore On March 28!

Warfield's kind of music is a mixture of adventurous modernistic pieces, jazz tinged salsa, and post-bop hipness...as an arranger, trumpeter Warfield is a top-rate craftsman, perhaps one of the best on the scene.
—JazzTimes 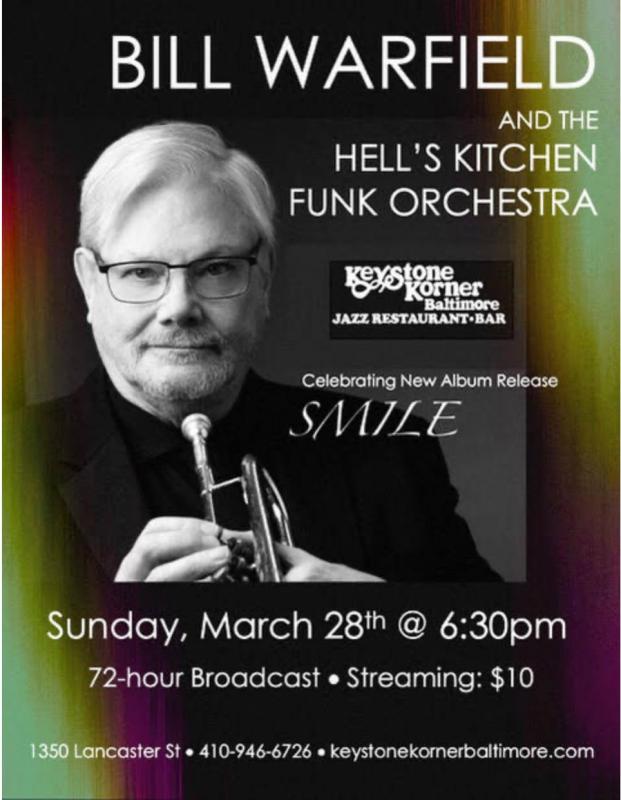 slideshow
The Hell’s Kitchen Funk Orchestra is a group of New York City Jazz and Studio musicians who aim to produce a brand of music that defies boundaries. The HKFO accomplishes just that on the new Planet Arts Network release Smile. Bill Warfield & The Hell's Kitchen Funk Orchestra are swinging into Keystone Korner Baltimore to celebrate the release of their new album this March 28th, 2021.

The Hell's Kitchen Funk Orchestra come together under the leadership of Bill Warfield, to present classic jazz, pop, funk and Latin styles, from Bobby Gentry to the Brecker Brothers to Benny Golson.

On their exciting new album, Smile, Bill Warfield and the Hell’s Kitchen Funk Orchestra not only fire on all cylinders, they run every yellow caution light. What other band would take on such stylistically disparate tunes as Booker T. and the MGs’ “Hip Hug- Her,” Weather Report’s “Cucumber Slumber,” the Eurythmics’ “The City Never Sleeps,” and the Charles Chaplin evergreen, “Smile.”

For listeners, the risks are amply rewarded. For Warfield and his one-of-a-kind little big band, all that matters is that the music cooks. “We had so much fun making this album, and I think it sounds it,” said the storied trumpeter and arranger. “For me, that’s what it’s all about.”

“Warfield's kind of music is a mixture of adventurous modernistic pieces, jazz tinged salsa, and post-bop hipness...as an arranger, trumpeter Warfield is a top-rate craftsman, perhaps one of the best on the scene." —JazzTimes