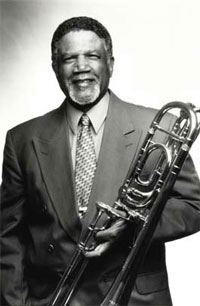 slideshow
Trombonist, Bill Hughes, bandleader and director of the Legendary Count Basie Orchestra, has announced his retirement on September 12, 2010. Hired by William “Count" Basie himself, Hughes first joined the Orchestra in 1953 and devoted nearly his entire career to the band. He assumed leadership of the band in 2003 following the passing of his musical companion and fellow trombonist, Grover Mitchell.

William Henry Hughes was born in Dallas, Texas, on March 28, 1930, and graduated from Armstrong High School in Washington, DC. He studied pharmacy at Howard University where he was a member of the Howard Swingmasters. Like the Tennessee State and Wilberforce Collegians the Morgan Aristocrats and the Royal Hamptonians, the Swingmasters wrote a very important chapter in the early history of the formal acceptance of jazz performance and scholarship at historic black colleges and universities. Swingmaster colleagues included saxophonist/flutist Frank Wess and bassist Eddie Jones. Hughes' academic achievement led him to the National Cancer Institute before joining the Count Basie Orchestra.

Except for a six-year hiatus to devote time to his family, Hughes was a “Basie-ite" for all of what is referred to as Basie's New Testament Era and is referred to by the current generation of Basie-ites as “Mr. B." Hughes toured the world with the Orchestra and played the most prestigious jazz festivals and venues. He contributed to 15 of the 17 Grammy winning Count Basie Orchestra recordings.

In addition to his many Basie credits, including several royal command performances, he has recorded and performed with many of the great vocalists in jazz. They include Tony Bennett, Rosemary Clooney, Nat “King" Cole, Sammy Davis, Jr., Billy Eckstine, Frank Sinatra, Ella Fitzgerald, Sarah Vaughan and Joe Williams.

“I have the most reverent and wonderful feelings about the great Count Basie Orchestra and all those who have supported us over the years, “ Hughes said. “It's been a wonderful ride, one that I will miss and cherish always."

Mr. Hughes will be succeeded by drummer, composer and arranger, Dennis Mackrel, who joined the Count Basie Orchestra in 1983 on the personal recommendation of vocalist, Joe Williams. Mackrel would become the youngest member of the orchestra and the last drummer to be hired by Mr. Basie personally. Mackrel remained with the band until 1987 when he launched his solo career and became the drummer of choice for many large ensembles including the American Jazz Orchestra, the Buck Clayton Swing Band, the Vanguard Jazz Orchestra, the Carla Bley Big Band, the Dizzy Gillespie All-Star Big Band and his own ensemble, the Manhattan Symphony Jazz Orchestra.

Bill Hughes will conclude his career with the Legendary Count Basie Orchestra with a week-long run at the Blue Note Jazz Club September 7-12, featuring guest vocalist, Ledisi. Tickets may be purchased at bluenote.net or by calling 212-475-8592. The Blue Note is located at 131 W. 3rd Street in New York.