SOURCE: JAZZWAX BY MARC MYERS
May 7, 2015
Sign in to view read count 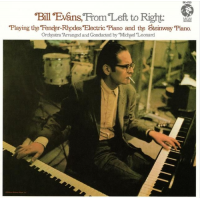 slideshow
Today, I'd like to return to multiple flutes in a jazz setting. In previous posts, I looked at several albums that featured this construct, including Buddy Collette's two albums with the Swinging Shepherds (here) and Henry Mancini's Fluter's Ball, Herbie Mann's I've Told Every Little Star and Nelson Riddle's arrangements for Frank Sinatra on I Guess I'll Have to Change My Plan (here).

In the wake of these posts, pianist Jan Stevens, a Bill Evans expert and friend, reminded me that arranger Michael Leonard used multiple flutes on The Dolphin, from Evans' From Left to Right album in 1970.

“In March 1970, Bill was in San Francisco recording From Left to Right for Verve, the album on which he plays piano and Fender Rhodes. For The Dolphin, the producer recorded just the rhythm section—Evans (p), Sam Brown (g), Eddie Gomez (b) and Marty Morell (d). Then arranger Michael Leonard had the idea of transcribing Bill's electric piano solo and having flutes overdub his solo, note for note, a month later in New York on April 23. Both tracks are fascinating and are known as The Dolphin (Before) and The Dolphin (After).

“Interestingly, it is one of less than a handful of bossa novas that Bill ever recorded, even when working as a sideman. Bill simply wasn't that attracted to the form, as he told me when I asked him about it in 1978 in his Closter, N.J. home. I can't tell  how many flutes there are on The Dolphin (After) because the strings overshadow them. However, the overdub on the solo begins with bass flute(s), with alto and C flutes added. Of course, these may be just two guys overdubbing themselves. Bill, as you know, was considered quite a fine flautist, and it helped him get through the awful years in the U.S. Army, which he hated."

And here's Evans' The Dolphin (After), with flutes and orchestra...