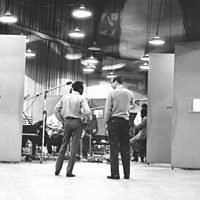 slideshow
Most jazz fans know that pianist Bill Evans wrote the liner notes that appear on the back of Miles Davis' Kind of Blue. What you probably don't know is that Evans' draft was worded slightly differently in places before he edited the text prior to submission. Yesterday, JazzWax reader Robert Brais sent along a copy of the original draft. He has the copy framed at his house.

Robert picks up the story:

“Bill Evans' final liner notes can be read here. What I've sent is a copy of the original draft that I received from my uncle’s neighbor in Lombard, Ill., who was a jazz aficionado. I used to stay over at my uncle’s home during summers when I was going to college nearby.   “Years passed, I got married, and each year I attended conventions at Chicago's Merchandise Mart, staying at my uncle's home. While there, I used to go downtown to hit the jazz spots, where I had the pleasure of listening to and meeting Evans.

“One night I spoke with Evans on one of his breaks. I asked him for his autograph, and he wrote a few words and signed it. You'll note that next to my name (below) is our son’s name, Patrice, in parenthesis. He had just been born, and I wanted him eventually to inherit this autograph and the copy of the Evans draft.

“Why the above paragraph? Have a look at the autograph scan and compare Bill Evans signature to the document which I have sent you. This will prove its authenticity. As to the original document, I don’t know what became of it. My uncle’s neighbor passed away and so did my uncle. We are going back some 60 years now. It's fascinating to see his ideas in his own handwriting."

JazzWax notes: It's fun reviewing Evans's changes. On the first page above he originally wrote “...has prompted the evolution of the extremely severe requirements..." At which point he stopped and crossed out “requirements," replacing it with “unique disciplines." While he turned one word into two here, he cut on the second page (below). Where he originally wrote, “...you will hear close to pure spontaneity in the important portions of these executions," he grew frustrated with the last word, crossing it out heavily and then removed the previous four words as well. He added an “se" in front of “the" to make it “these" and then replaced the cut simply with “performances."

What isn't clear is whether he wrote a final version based on this draft that was then submitted or whether he submitted this one and changes to the intro were made in production. Either way, a glorious moment in jazz history.