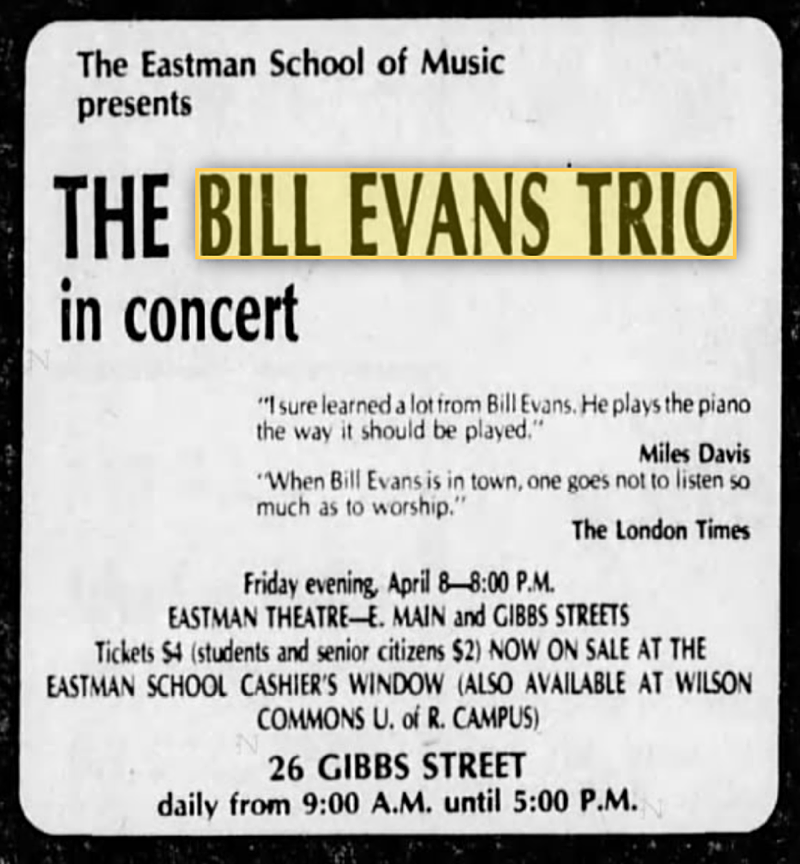 slideshow
Over the weekend, pianist Dave Thompson sent along a link to a recently uploaded, hour-long video of the Bill Evans Trio in concert in 1977. While the person who uploaded it thought the performance took place in Boston, it actually was held at the Eastman Theatre in Rochester, N.Y. Based on my additional research, Evans performed there twice—on Friday, April 8, 1977, at 8 p.m. (tickets were $4, or $2 for students and seniors) and again on Tuesday, April 12.

The concert was captured for At the Top, a jazz series of videotaped  concerts produced by Rochester's WXXI, a PBS TV station. The result aired on Thursday, July 21, 1977 on Channel 24. The songs on the video are Emily, Time Remembered, Summertime, In Your Own Sweet Way, I Loves You Porgy, Up With the Lark, Some Other Time and My Romance. The high points for me here are Evans on Porgy and Some Other Time. Chuck Israels on bass is commanding throughout.

Though the image and sound on the YouTube video are wobbly with a hum, what's interesting is that Chuck Israels is on bass. I wasn't aware that Chuck played gigs with Evans so late into the 1970s but he did. And his bass playing here is superb, especially on the solos. One senses Evans was wooing him with hopes of bringing him in if Eddie Gomez, the trio's working bassist at the time, left the group.

I reached out to Chuck for additional insights:

Hi Marc. As I recall, this concert was booked at a time when Eddie Gomez had another obligation in California. The three of us flew up to Rochester together from New York, and Bill wrote quick chord charts for Emily and Up With the Lark on airline stationery. At the time, I was unfamiliar with these songs. We jumped in unrehearsed, and this was the result. I don't recall playing on April 12. I remember interacting with students in classrooms, so we probably did a few clinics while up there.

Among the things that strike me: By this time, Bill seemed to be on auto pilot—a high level one, but the newness of the music had receded somewhat from Bill since I’d last played with him. I felt that beginning to happen before I left the trio 11 years earlier. Maybe the fact that I didn't really challenge him that night made some contribution to this.

I know I didn’t push him or compete with him the way Scotty LaFaro had. By 1977, 11 years of study, composing and general musical development later, maybe I might have been able to do that more. But there were reasons it didn’t seem like the best path for me, career-wise. A few months later, Eddie left and Philly Joe was playing drums. Bill was looking for a bassist.

Around that time, I played with them for a few nights at New York's Village Vanguard. But there was so much intravenous cocaine-consumption going on that the music was frantic. So I turned down Bill’s invitation to join the trio. Bassist Marc Johnson took the job a few days later.

As much of an impact that Bill's music had on me (almost immeasurable), the majority of its effect happened starting in 1955, before I played with him and had only heard him. And while it still sets some essential aesthetic boundaries for me, something was starting to lose immediacy for me by the time I left. I was determined to create music on my own that held the powerful thrills Bill’s music first provided. I’m still chasing that dream.

That said, I’m glad to have access to this video, even though the quality is abominable, the sound isn’t much better, and the bass sounds over-amplified. I’m sure I didn’t use a pickup, but there’s an enormous amp behind me. Maybe the sound guys were running the bass mic through that. In any case, the bass sound veers a little too much towards an electric quality for my taste. Of course, that may also be the poor sound quality of the recording.

Here's the Bill Evans Trio in Rochester in April 1977, with Bill Evans on piano, Chuck Israels on bass and Eliot Zigmund on drums...

If you're a stickler for sound, as I am, do your best to line up the following audio, from a CD, with the video...