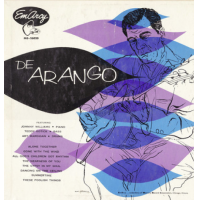 Speed set Bill De Arango apart. When he arrived in New York from Cleveland in 1944, he fit in almost immediately on 52nd Street. In 1945, when World War II ended and bebop began nudging swing aside, De Arango was perfectly positioned. A terrifyingly fast player, he was among the few guitarists at the time who could keep up with horn players and pianists playing the new music. Influenced by the staccato attack of trumpeter Roy Eldridge and guitarists Django Reinhardt and Charlie Christian, De Arango for some reason didn't record much as a leader. His only early leadership album was a 1954 10-inch LP for EmArcy entitled De Arango.

Born in Cleveland in 1921, De Arango attended Ohio State University and played locally from 1939 to 1942. He then joined the Army soon after the Pearl Harbor attack and America's entry into the war. Discharged in 1944, De Arango found that the music and musicians he listened to most were dismissed by musicians he knew in Cleveland. So De Arango set off looking for musical colleagues with more sophisticated taste.

As De Arango told Mark Gardner in a 1971 interview in Jazz Journal, “I met some guys who were playing in clubs. They'd let me come in and sit in with them and they'd teach me sounds. These were black musicians and they were just beautiful because they allowed me to grow musically. I learned quickly—because of them really."

De Arango moved to New York in '44 at the suggestion of friends who lived and worked there. As De Arngo told Gardner: “When I got to New York, I went down to 52nd Street and when I heard them I thought I ought to go home. It was really a shock. I was introduced to some people down there and I sat in with Don Byas. He had that speed then. We played something like Sweet Georgia Brown at a real crazy tempo. Ben Webster (above) was in the room, and when we finished the set he asked me if I'd like to go to work with him; he was across the street at the Onyx. It was one of those things—it happened quickly. This was at the end of 1944."

Though De Arango didn't play in Dizzy Gillespie's working groups, he did record with the trumpeter in 1945 on three songs with Sarah Vaughan and Charlie Parker. He also recorded with Gillespie on an RCA session in February 1946 that included 52nd Street Theme, A Night in Tunisia,, Ol' Man Rebop and Anthropology. Recording dates followed with Slam Stewart, Ike Quebec, Erroll Garner, Eddie “Lockjaw" Davis, Ben Webster and Charlie Ventura. In 1948, he returned to Cleveland to study composition and play locally. In the early 1950s, De Arango grew tired of playing Cleveland strip clubs and returned to New York with the advent of the long-playing record.

In May 1954, De Arango recorded a leadership album for EmArcy, backed by Johnny Williams (p), Teddy Kotick (b) and Art Mardigan (d). As a guitarist, De Arango had a relatively dry tone. Unlike other players, who let notes ring warmly and wound up with much of the work, De Arango preferred a bird-like picking style that made notes sound like a flurry of darts. His guitar runs came across more like trumpet or mandolin solos. This is evident on the brisk Gone With the Wind and halting The Song Is You. Both are superb examples of a technique that made De Arango special. As for his improvisation, De Arango liked density and mystery. On All God's Chillun Got Rhythm, we never hear the song's written melody. Instead, De Arango invents a new melody on the chord changes.

Other than two leadership 78-rpm sessions in the mid-1940s that yielded eight songs, De Arango recorded only two albums—De Arango (1954) and Anything Went (1993), a more abstract free-jazz effort. Fed up with touring, shifting tastes and the pressures of recording, De Arango opened a music store in Cleveland in the late 1960s.