SOURCE: ALL ABOUT JAZZ PUBLICITY
June 14, 2008
Sign in to view read count 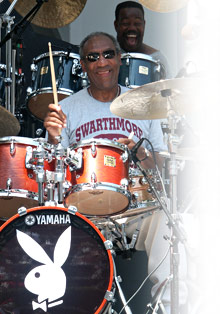 Bill Cosby had to opt for comedy over being jazz drummer, but loves role at Playboy jazz fest

(NEW YORK) Bill Cosby quips that he gave up his dreams of becoming a professional jazz drummer and turned to comedy after seeing how easily the pioneer bebop drummer Max Roach handled rhythmically complex tunes that he struggled to get through.

“I finally went to see Max play and he played a song 'Parisian Thoroughfare' that Bud Powell wrote," said Cosby. “Max sat there so relaxed and playing it like he was wiping off a table top or something. And I said, 'No, no. I got to be funny.'"

Despite that career detour, Cosby will be master of ceremonies at the 30th Playboy Jazz Festival on Saturday and Sunday -- and he'll get in some licks on drums with his band Cos of Good Music before thousands of people packing the Hollywood Bowl.

Cosby, 70, thought about retiring from his M.C. role when he skipped the 2005 festival, but he missed it so much that he was back again the following year. Now he's instructed his agent not to book him anywhere else on the June festival weekend.

The comedian's friendship with Hugh Hefner dates back to 1963 when he was making his Chicago nightclub debut and received an invitation to a party at the Playboy Mansion. Hefner had no trouble persuading him to host the first Playboy Jazz Festival in 1979 and he's only missed three since then.