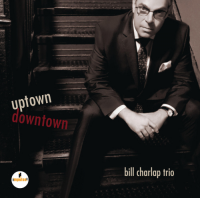 slideshow
The last time I saw pianist Bill Charlap was in July at 92Y's Jazz in July series in New York, where he directed one of the most spectacular jazz concerts I've seen in some time. Bill's trio backed Jimmy Heath and Benny Golson, two legendary tenor saxophonists who were in superb form that night. Much of the concert's cohesion and success was a result of Bill's inspiring performance. His solos were so imaginative and impeccable throughout that both Jimmy and Benny wandered over to the piano to watch what Bill was doing. He was really something.

Since there were no liner notes written for the album, I'll provide some here:

The album opens with Gerry Mulligan's Curtains, which Bill recorded with Mulligan on the baritone saxophonist's album Lonesome Boulevard in 1989. Bill also recorded the song with Ted Rosenthal on their Gerry Mulligan Songbook in 1996. On his version on the new album, Bill teases out the ballad's complexity and rich harmony beautifully.

Bill's rendition of Tommy Wolf and Fran Landesman's Spring Can Really Hang You Up the Most is deeply sensitive, patient and introspective. It opens like a flower, and the song is my favorite on the album.

Stephen Sondheim wrote Uptown, Downtown for Follies (1971), but the song was cut from the musical and wound up in his Marry Me a Little (1980), a musical comprised of rejects from other shows. Bill's version lifts the song into a jazz place without losing the song's theatrical swagger.

The One I Love Belongs to Somebody Else was a fox trot written by bandleader Isham Jones and Gus Kahn in 1924 for Al Jolson to record with Jones that year. But the standard's best-known version probably is the one recorded by Frank Sinatra in June 1940 with Tommy Dorsey and the Pied Pipers. Dig the sporty ending by Bill.

Michael Leonard and Herbert Martin's I'm All Smiles was written for the 1965 Broadway musical The Yearling. The show was blessed with quite a marketing push, as Barbra Streisand recorded four songs from the production—one on People, two on My Name Is Barbra and another on My Name is Barbra Two. Among the many jazz artists who took on the song were Hampton Hawes, Nancy Wilson and Bill Evans, who recorded it on From Left to Right, his acoustic piano/Fender Rhodes album in 1971. Bill Charlap here takes the song nice and slow, making great use of space and allowing all of the waltz's romantic qualities and colorations to emerge.

There's a Small Hotel by Rodgers and Hart for Broadway's On Your Toes (1935) is nothing short of extraordinary. Fully aware he had to take this over-recorded standard to another level, Bill delivers by choosing a walking pace and giving it a George Shearing feel, with touches of Oscar Peterson and Erroll Garner here and there. And again, Bill delivers one of the prettiest song endings. [Image above, the 1954 revival]

Gigi Gryce's Satellite was first recorded by Gryce on Art Farmer's Evening in Casablanca (Prestige) in 1955. Bill works wonders on this upbeat and intircate bop composition.

Guitarist Jim Hall recorded his Bon Ami on Dialogues in 1995 and Bill followed the following year with a trio version on his Distant Star album. On the new album, he doesn't stray far from the approach used in '96.

Sophisticated Lady by Duke Ellington was written in 1932 and recorded in 1933. Bill quickens the traditional tempo and adds a strong shot of swing throughout.

As always, gorgeous accompaniment by Peter Washington and Kenny Washington (no relation). The tenderness is really something.

Bill dedicated the album to engineer Jim Czak, who died last winter. Jim would have called me to rave. I miss him and those passionate calls.