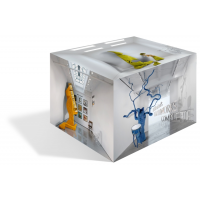 What's in the box?

Orders via Cherry Red and Burning Shed include a postcard of Dave McKean’s artwork, hand signed by Bill Bruford, while stocks last.

What do people say?

“A tremendous treasure trove of material known and previously unheard." —All About Jazz

“This is a heady concoction indeed, and one which joyously breaks down all sorts of musical barriers in its path." —The Times, London

“It mixes up styles, moods and meters as effortlessly as it ignores musical boundaries." —Wall St. Journal

“Earthworks makes jazz out of just about anything handy…" —Jazziz