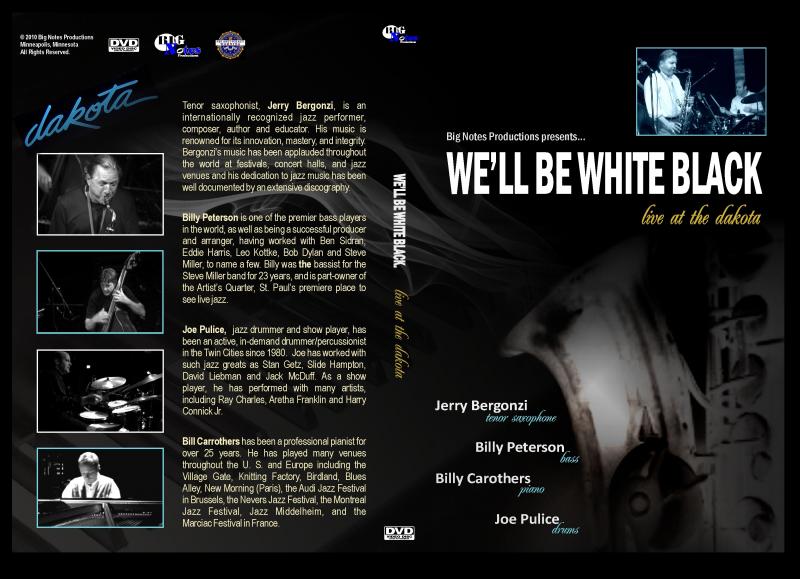 Big Notes Films, a film production company owned and operated by Bradford Thompson, is pleased to announce the release of the DVD We'll Be White Black, filmed live at The Dakota Restaurant & Jazz Club in Minneapolis. It was a collaborative project with Billy Peterson (former bassist, The Steve Miller Band) as Music Producer, and Bradford Thompson as Director/Producer.

Tenor saxophonist, Jerry Bergonzi, is an internationally recognized jazz performer, composer, author and educator. His music is renowned for its innovation, mastery, and integrity. Bergonzi's music has been applauded throughout the world at festivals, concert halls, and jazz venues and his dedication to jazz music has been well documented by an extensive discography.

Billy Peterson is one of the premier bass players in the world, as well as being a successful producer and arranger, having worked with Ben Sidran, Eddie Harris, Leo Kottke, Bob Dylan and Steve Miller, to name a few. Billy was the bassist for the Steve Miller band for 23 years, and is part-owner of the Artist's Quarter, St. Paul's premiere place to see live jazz.

Joe Pulice, jazz drummer and show player, has been an active, in-demand drummer/percussionist in the Twin Cities since 1980. Joe has worked with such jazz greats as Stan Getz, Slide Hampton, David Liebman and Jack McDuff. As a show player, he has performed with many artists, including Ray Charles, Aretha Franklin and Harry Connick Jr.

Bill Carrothers has been a professional pianist for over 25 years. He has played many venues throughout the U. S. and Europe including the Village Gate, Knitting Factory, Birdland, Blues Alley, New Morning (Paris), the Audi Jazz Festival in Brussels, the Nevers Jazz Festival, the Montreal Jazz Festival, Jazz Middelheim, and the Marciac Festival in France.

The DVD is available for sale on Amazon.com, as well as at bignotesfilms.com. Visit the website for more information about Big Notes Films, and other completed projects.