SOURCE: BERKLEE OFFICE OF PUBLIC INFORMATION
May 3, 2011
Sign in to view read count 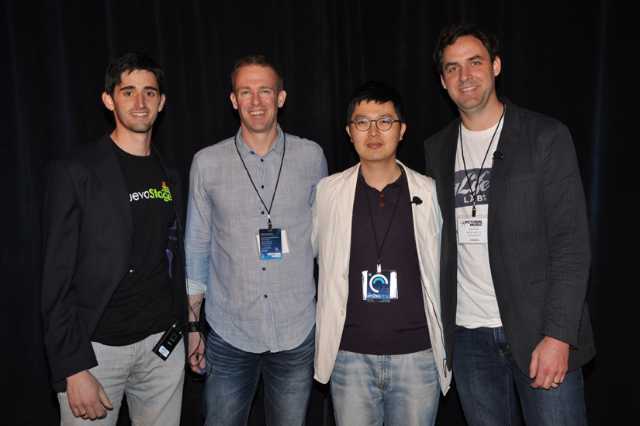 Boston, MA—This week, Boston's Hynes Convention Center played host to the inaugural Rethink Music: Creativity, Commerce and Policy in the 21st Century, presented by Berklee College of Music and MIDEM, in association with Harvard University's Berkman Center and Business School. The conference brought together 500 attendees including creators, industry experts, policymakers, and academics for high-level deliberation seeking and developing solutions for the unpredictable trajectory of the music industry.

As part of Rethink Music, Berklee and Harvard Business School ran a music industry business model competition seeking proposals for businesses that provide novel ways to stimulate and monetize creativity in the music industry. After receiving hundreds of entries, the judges narrowed the field down to three finalists who presented their plans at Rethink Music on April 27. NuevoStage was named the winner of the business model competition at the close of the conference.

NuevoStage lets performing artists and their fans work together to book venues on nights that are currently empty. By proving there is a demand for a performance by a particular artist through advance ticket sales on its website, NuevoStage makes it possible to open stage space that was never thought to be profitable. NuevoStage's mission is to help connect venues, artists, and fans in hopes of putting more musicians on stage, bringing more fans to venues, and providing fans with more live music experiences.

“More than the check, the award from the music industry and Berklee especially will improve our chances of making a huge impact as we go out and market our business," said Maxwell Wessel, co-founder of NuevoStage. “Our company is made up of tech heads and MBAs. The award is like a stamp of approval and will help us establish our credibility with club owners and others in the industry."

Eliot Hunt, a Berklee alumnus who founded BigLife Labs, Inc. to facilitate the online collaboration of music performances, was awarded the first runner-up prize of $5,000.

Ian Kwon, who created Fanatic.fm, an album publishing platform connecting bands with brand sponsorships, was also a finalist who presented his business plan at Rethink Music.

The proposals were evaluated using three criteria: value creation, innovation, and viability. A panel of venture capitalists, faculty from Harvard Business School and Berklee, and industry executives reviewed the finalists live presentations to determine the winner.

“In the initial phase of judging, we reviewed nearly 200 submissions and the decision process was very difficult to narrow them down to a single winner," said Allen Bargfrede, Executive Director of Berklee's Rethink Music Initiative and assistant professor of Music Business. “We all thought that many of the proposals showed real promise, but NuevoStage did the best job of solving one of the biggest problems of being a developing artist, booking live performances, and they communicated their product very effectively."

Berklee College of Music, for over 65 years, has evolved to support its belief that the best way to prepare students for careers in music is through contemporary music education. The college was the first in the U.S. to teach jazz, the popular music of the time. It incorporated rock n' roll in the 1960s, created the world's first degree programs in film scoring, music synthesis, and songwriting, and, in recent years, added world music, hip-hop, electronica, and video game music to its curriculum. With a diverse student body representing over 80 countries, a music industry “who's who" of alumni that have received 200 Grammy Awards, Berklee is the world's premier learning lab for the music of today and tomorrow.