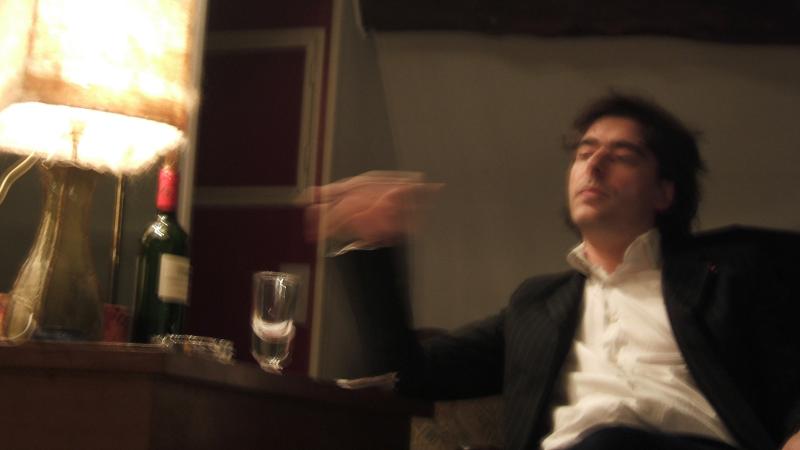 slideshow
"Plenty of forward-thinking jazz pianists have been painted with a modern-classical brush, but few have approached improvisation armed with the manual vocabularies demanded by Cage, Ligeti and the like with the same diligence and flair as Parisian keyboardist Delbecq." —Time Out New York

Acclaimed Paris-based pianist Benoît Delbecq has been awarded the Grand Prix de l'Académie Charles Cros for his simultaneously released Songlines CDs, Circles and Calligrams and The Sixth Jump, it was announced November 25 in Paris. The prize, which is the most influential music award in France, is accorded annually in some 13 categories, including popular French song, classical music, contemporary music, world music and jazz, encompassing both CDs and DVDs, as well as for outstanding books of musicology. Delbecq is the first artist to have won in the Jazz category for two recordings. Previous jazz winners include Steve Swallow, Daniel Humair/Joachim Kuhn/Tony Malaby and Terence Blanchard.

The Académie Charles Cros (Charles Cros Academy) is a French organization that acts as an intermediary between government cultural policy makers and professionals in music and the recording industry. Founded in 1947, it is composed of fifty members specializing in music criticism, sound recording and culture, and was named in honor of Charles Cros (1842-1888), an inventor and poet who was one of the pioneers of sound recording. Since 1948 the Académie has awarded the Grand Prix du Disque to recognize achievements in recorded music.

Circles and Calligrams and The Sixth Jump are Delbecq's ninth and tenth releases for Songlines, including various collaborations and the co-led groups Kartet and Poolplayers. On the two CDs the Paris-based pianist has recorded two slightly overlapping programs of his compositions, some new, some revisited. Returning to the solo piano on Circles and Calligrams following his remarkable piano duo of 2009 with Andy Milne, Where is Pannonica?, and his 2003 solo debut Nu-turn, and presenting his first trio on The Sixth Jump, Delbecq offers a career summary of sorts while continuing to advance and refine his unique approach. Lauded as “one of the avatars of prepared piano" by Jazz Times, he is noted for traveling, as the New York Times review of both CDs states, ..."a mixed continuum of modern jazz, indigenous folk, and contemporary classical..."

Delbecq's trio on The Sixth Jump features Jean-Jacques Avenel, who was Steve Lacy's preferred bassist for 20 years, and Congolese drummer Emile Biayenda, who uses two snare drums and two gourds, with an ankle shaker attached to his bass drum. Another notable feature of both releases are the remixes, which present new sonic perspectives on the music making. On Sixth Jump the remixes are by drummer/electronics wizard Steve Argüelles, who Delbecq has collaborated with for 20 years in groups such as the Recyclers and Delbecq 5, and for the past 13 years in the duo Ambitronix.