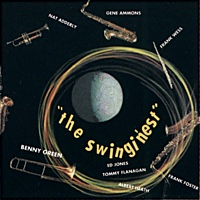 slideshow
Bennie Green had a distinctive trombone. He played in a powdery, insistent staccato style seasoned with the Chicago blues. A member of the challenging Earl “Fatha" Hines and Charlie Ventura bands in the 1940s, he also recorded in bop ensembles. In the 1950s, Green was a sideman on numerous sessions, including the Miles Davis Sextet with Sonny Rollins in 1951, the year he began recording as a leader.

One of his best jazz-blues albums is The Swingin'est, recorded for Vee-Jay in November 1958. Co-led by tenor saxophonist Gene Ammons, the pair zig-zagged boldly and were joined by an all-star band: Nat Adderley (cnt), Frank Foster (ts), Frank Wess (ts,fl), Tommy Flanagan (p), Eddie Jones (b) and Albert “Tootie" Heath (d). With Wess and Foster aboard on horns as well as compositions and arrangements, the ensemble has a Count Basie air, since both were members of the band at the time. Adderley's tight cornet punctuates while the rhythm section led by Flanagan swings.

In particular, Frank Foster's Going South, a mid-tempo blues, stands out and so does Frank Wess's Little Ditty. They are not recognized enough for having it all—unique tenor sounds, terrific composing skills and wonderful arranging styles.