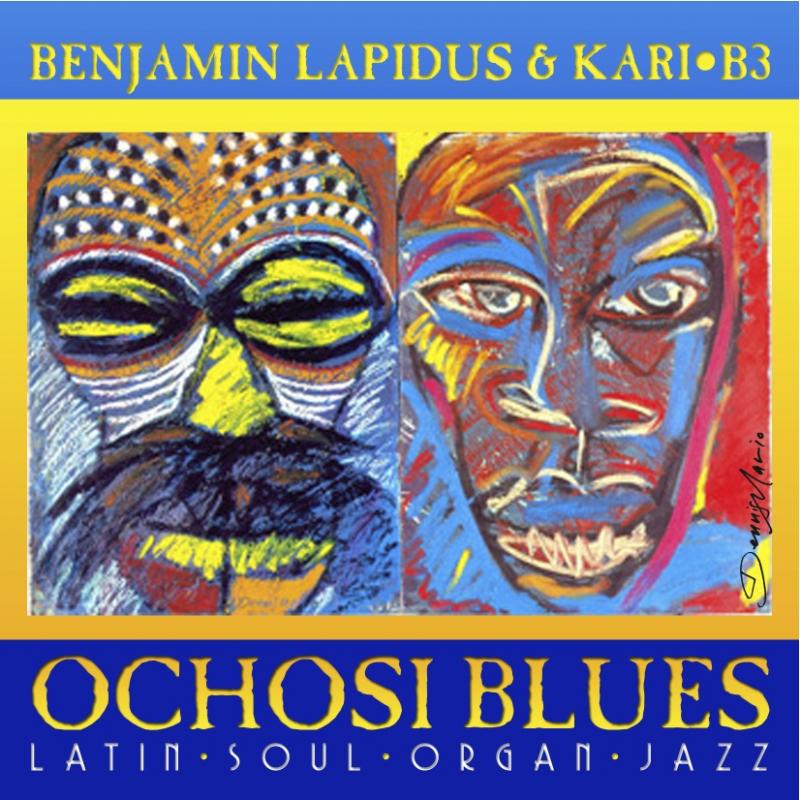 “This project was born out of everything that I love in music (Caribbean rhythms, folklore, Jazz, and the inspired imaginings of musicians in conversation with each other) and of my obsession with the Hammond B3 organ, which included hours of listening to Jazz organ combo recordings. Often, these recordings feature a great conga player who is confined to playing a tumbao on a backbeat. I love the sound of the Hammond B3, but the conga drum on the backbeat only hinted at the possibilities of these two worlds meeting. What would it sound like if that conga in the organ combo was front and center? More practical questions followed: What would the repertoire be? Who would play it? What would it sound like? Wouldn't it be great to have the concept turned inside out with the organist playing the bass tumbao and the whole band swinging in clave? Shirley Scott and the Latin Quintet got into some of this and the great Panamanian organist, Avelino Muñoz did as well, but could we push the envelope? If jazz drummers play mambo patterns in their solos to “get house" in straight-ahead performances, why not play Latin standards in swing? Kari-B3 and “Ochosi Blues" are the result of these musings and truly, we are only beginning to answer the questions above." - Benjamin Lapidus

Latin music's cutting-edge musician/scholar returns with Ochosi Blues, a swinging and ear-pleasing recording that is inspired by the vast musical traditions of the Spanish Caribbean and the equally deep tradition of the jazz organ combo with a sprinkling of West Indian flavor. The result is a powerful and joyous listening experience that offers a truly unique take on the organ combo. When asked to label Benjamin Lapidus' music, critics and fans agree that it is Latin Jazz in the truest sense of the term, as Lapidus continues to explore different ways of mixing Jazz and Spanish-Caribbean music, while making the music accessible, organic, and logical. This is the direct result of the New York musicians involved, who are completely bi-and even tri-cultural, a benefit of being residents of the largest Caribbean city in the United States. Active in the New York Latin scene since 1995, Lapidus has made a name for himself among the elders as the go to player for long- established bands and new live and recording projects such as The Buena Vista Social Club, Jerry and Andy González, Típica 73, Larry Harlow, and many more. Ochosi Blues, the Album

Critics and fans agree that Benjamin Lapidus' music is unique in its cutting-edge approach without sacrificing accessibility or the traditions of Spanish-Caribbean music. With Ochosi Blues, Lapidus continues his dynamic vision of bringing Spanish-Caribbean music and jazz together as equals while charting new ground and creatively altering conventions of both worlds. He started on this path in his previous five releases (1998-2005) as the leader of the world-renowned Latin jazz phenomenon Sonido Isleño, and continued with his pan- Latin jazz interpretation of the Brazilian songbook with Kaori Fujii on Garota de Ipanema for RCA Victor Japan (2007). In 2008, he released Herencia Judía a critically acclaimed Afro-Latin Jewish recording project.

In addition to Ochosi Blues, Lapidus has been busy performing on tres with Típica 73, the legendary salsa band co-led by Sonny Bravo and Johnny “Dandy" Rodríguez. He is also performing with Larry Harlow and Michael Stuart at Lincoln Center for the salsa opera, Hommy. Lapidus sings and plays on Paul Carlon's album, La Rumba is a Lovesome Thing: A Tribute to Billy Strayhorn. This exciting nonet has been performing throughout New York City before and after the release of the album and regularly at the Zinc Bar. In addition, Lapidus' catalogue of compositions is being championed by Cuban jazz innovator Pablo Menéndez and Mezcla as his 1998 piece “¿Quién Tiene Ritmo?" appears on the band's 30th anniversary DVD. Singer songwriter José Conde also recorded Lapidus' “Bizcocho" for his forthcoming release. In 2014, Lapidus performed and recorded with master musician, Andy González in support of the forthcoming Truth Revolution Records album to be released in December 2014. - Benjamin Lapidus

BIO: Born in Hershey, PA in 1972 to first-generation Brooklynites, Lapidus moved almost 15 times before returning to New York City at the age of 14. Trained in piano from a young age, he moved through a variety of instruments including trumpet and bass before concentrating on the guitar. Lapidus was exposed to music by his grandmother and his father, who played in Latin and jazz bands in the Catskills in the 1950's. Through his father's record collection and stories of his father's visits with his Latin American relatives, the seeds of Latin music were planted. Yet it wasn't until the 1980's that the youngest Lapidus became immersed in Latin music, when he moved to a predominantly Latin neighborhood in New York City, where numerous important musicians also resided. Living a block away from Mikel's jazz club, Lapidus still has vivid memories of practicing in Mario Rivera's house or seeing Mario Bauzá walk down the street. Deciding he needed a complete musical education, Lapidus earned two degrees from Oberlin Conservatory and Oberlin College, becoming one of the program's first jazz guitar graduates. In 1994, Lapidus started to play the Puerto Rican cuatro and Cuban tres. After leading his own quartet at festivals and clubs throughout Europe and winning a grant to study briefly with Steve Lacy in Paris, he returned to the U.S. and worked with Joe McPhee, Joe Giardullo, Tani Tabal, Thomas Workman, and other creative improvisers.

At the same time, Lapidus began performing with Larry Harlow, Alex Torres, and other Latin music luminaries in New York and Puerto Rico. Lapidus earned a Ph.D. in Ethnomusicology at the CUNY Graduate Center in 2002. His travels to Cuba acquainted him with distant relatives and grounded him in the music of Eastern Cuba. He has taught popular music of the Caribbean, Latin music in New York, and world music at Queens College and John Jay College of Criminal Justice, CUNY where he is a tenured associate professor in the department of art and music. In 2008, Lapidus published the first-ever book on the Eastern Cuban musical genre changüí called Origins of Cuban Music and Dance: Changüí (Scarecrow Press). In addition to having published peer-reviewed articles and book chapters, and reading papers at international conferences, he has written liner notes and served as scholar-in-residence with the Jewish Museum and the New York Center for Jungian Studies during humanitarian missions to the Jewish communities of Cuba. In 2013, Lapidus won a prestigious NEH fellowship for his forthcoming book Nueva York: The History of Spanish Caribbean Music in New York City and the Shaping of an International Sound, 1940-1990.