SOURCE: TWO FOR THE SHOW MEDIA
January 16, 2008
Sign in to view read count 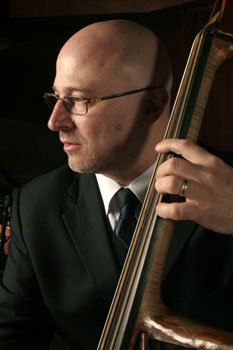 slideshow
Bassist, composer, and bandleader Ben Wolfe will be performing with his Octet as part of the Harlem in the Himalayas series at the Rubin Museum in New York City on January 25th, 2008

Bassist-composer-educator Ben Wolfe was born in Baltimore, Maryland, but grew up in Portland, Oregon. By his early twenties, he was freelancing in the Portland area and also backing Woody Shaw and other national acts when they came through town. At age 23, he moved to New York, where he worked with musical luminaries such as Junior Cook, Jimmy Cobb, Dakota Staton, and the Mel Lewis Orchestra.

By 1988, Ben landed a gig with Harry Connick Jr. and went on to record over a dozen albums and soundtracks, to perform on numerous world tours as musical director and a key performing member of the Harry Connick Jr. Orchestra. During his five years with Connick, Ben appeared on many television, radio, and other media performances. Ben then went on to the Wynton Marsalis Septet, where he stayed until the group disbanded.

Through the years he has gained a large following of jazz aficionados through his work with Wynton Marsalis and the Lincoln Center Jazz Orchestra, which included performances with Joe Henderson, Doc Cheatham, Jon Hendricks, Harry “ Sweets" Edison, and Billy Higgins to name a few.

The artists Ben has recorded with include Wynton Marsalis, James Moody, Marcus Roberts, Branford Marsalis, Eric Reed, Benny Green, Carl Allen, and Diana Krall. He has been an integral part of Diana Krall's touring band and has played on many of her recordings, including the Grammy Award winning CD, “ When I Look In Your Eyes".

Ben has created five CDs leading his own group. All five are made up of solely of his own compositions and arrangements. The first is entitled “13 Sketches" (1996), the second “Bagdad Theater" (1997); both of these have been released on Mons Records. His third CD, the critically acclaimed “Murray's Cadillac" (2000) has been released on Amosaya Records. Ben's fourth CD, “My Kinda Beautiful" (2004) has been released by Planet Arts Recordings. This CD features writing for a large ensemble including strings.