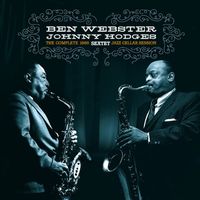 slideshow
In the fall of 1960, Ben Webster was on the West Coast freelancing and recording. Johnny Hodges was out there as well with the Duke Ellington Orchestra to perform at the Monterey Jazz Festival. On Nov. 22, two days before Thanksgiving, Webster and Hodges were in San Francisco to record an album for the Verve label that was never released. The CD should be added to any list of jazz albums that will instantly convert non-believers into life-long fans.

The recording took place at the city's Jazz Cellar club, which was turned into a studio without an audience. The pair of former Ellingtonites were backed by Ella Fitzgerald's working quartet at the time—Lou Levy on piano, Herb Ellis on guitar, Wilfred Middlebrooks on bass and Gus Johnson on drums. The tracks were recorded just after Fitzgerald completed her Harold Arlen songbook album and her now-famous Christmas album with the Frank De Vol Orchestra.

Originally released for the first time as part of Mosaic's now out-of-print box, The Complete Verve Johnny Hodges Small Group Sessions 1956-61, the recordings are flawless in every way—from pace and phrasing to tone and improvised ideas. It's a solid knee-swinger.

Webster and Hodges in both groups are dreamy. Both clearly listened intently to the other as they played, treating the joint venture like two singers harmonizing. It's unclear why this material was never released by Norman Granz (above). My guess is he held it back from MGM when he sold Verve to the film corporation in 1961 and then forgot about the tapes or planned to return to them but after Webster moved to Europe in 1965 it was too late. Or any release of the material would have signaled to Verve's new owners that he had held back on product that should have been theirs. It's all history now. We have the music and it's glorious.

JazzWax tracks: Although the Mosaic box is out of print, you can find this Webster-Hodges material on the Complete 1960 Jazz Cellar Session on a European import label here.

Or you can let the album run as you work...