Bebel Gilberto: All in One 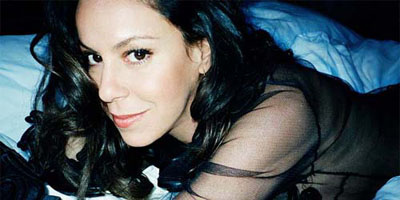 Brazilian pop singer Bebel Gilberto is probably known more in the U.S. for her collaborations (Thievery Corporation and David Byrne, etc.) than for her solo work, even though she is a native New Yorker. The new All In One, her first album for Verve, doesn't stray far from the strains of adult-oriented world music that you'll find in her other solo work. It might strike you as mildly exotic bubblegum on first listen, but the quality of the songs themselves will reward the patient listener.

A couple of appropriate covers don't hurt: Bob Marley's “Sun Is Shining" is almost unrecognizable, but a clever Latin-lite arrangement and Gilberto's throaty moan make it a pleasant daydream. Stevie Wonder's “The Real Thing," however, may be the highlight of the album; with production by Mark Ronson, the subtle horn, flute and vibraphone accompaniment and snappy snare backbeat allow Bebel's voice to be the star, and the song stands out as the main booty-shaker on the disc.

Some tracks just don't play to the singer's strengths. “Bim Bom," a song written by her father, Joo Gilberto (widely known as the inventor of Bossa Nova), benefits from lush harmonic arrangements, but Bebel's phrasing is inexplicably rushed, with loud, unnatural breaths interrupting the flow of the song. But when she gets intimate and personal, as on “Nossa Senhora" and “Far From The Sea," her voice is at its most effective, not lilting but airy and somewhat intoxicating. Her disregard for melodic and rhythmic precision lends character, whereas on glossier tunes like the title track, it just sounds a little amateurish. But then there are the breezy harmonic sighs that carry you away. This song highlights the best and worst qualities of the album: four different producers (at least eight over the whole album) surely contribute to an overall lack of cohesion, but some lovely arrangements and an almost tactile warmth make up for the missteps.