SOURCE: ALL ABOUT JAZZ PUBLICITY
April 28, 2008
Sign in to view read count 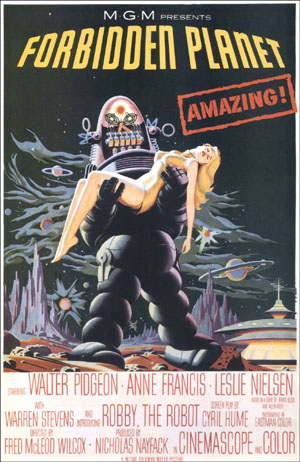 Bebe Barron, a pioneering composer who started manipulating sounds after receiving a tape recorder as a wedding present and later scored the 1956 science-fiction film “Forbidden Planet," the first full-length feature to use only electronic music, has died. She was 82.

With her engineer husband, Louis Barron, she created “a soundscape for 'Forbidden Planet' that no one could ever have imagined," Jon Burlingame, a film music historian who teaches at USC, told The Times. “It was hugely ground-breaking."

The soundtrack “may have done more than anything to popularize electronic music," which until the movie's release belonged exclusively to the academic and avant-garde recording studio, music critic Mark Swed wrote in The Times in 2006.

Because the modern synthesizer was still evolving, the couple created electronic circuits, which produced tones that they altered with a tape recorder. Louis usually built the circuits while Bebe pieced together the beeps, burbles and bubblings into a score that even the Barrons were reluctant to call “music."

In his 1956 review of “Forbidden Planet," Philip K. Scheuer wrote in The Times that the “electronic tonalities" -- as the score was credited -- heightened “the strangeness and terror" of life on another planet.

The Barrons had created the prototypical science-fiction soundtrack.

“The score was an extraordinary achievement," Burlingame said. “It showed the way for music and sound design to more or less merge. When you listen to that movie, you don't know when you are listening to sound effects or music. The whole line is blurred."

After one of Louis Barron's cousins gave the newlyweds a tape recorder in 1947, they created early audio books featuring writer friends such as Anais Nin and Aldous Huxley reading their works. The books sold well, but the Barrons failed to make money, Bebe once said.

Mathematician Norbert Wiener's 1948 book “Cybernetics" influenced their approach. The book suggests that certain natural laws of behavior apply to both animals and electronic machines. Using equations from the book, Louis began designing vacuum tube-powered circuits, and Bebe recorded the tones they made. They varied the sounds by playing the tape recording backward, adding echo or drastically slowing it down.

New-music composer John Cage hired the couple to record sounds for the “Williams Mix," a 1952 tape-splicing experiment. The project featured more than 600 sounds that were cut into tiny bits of tape and spliced together according to the composer's score. It took the Barrons more than a year to complete.

Their first fully electronic piece was a score for “Bells of Atlantis," a 1952 film featuring Nin.

Throughout the 1950s, their studio served as a “functioning center for electro-acoustic music" when there was no institutional support for the medium in the U.S., according to Schrader.

Nearly broke after years in the recording business, the Barrons crashed an art opening for the wife of Dore Schary, president of MGM. After hearing some of their work, he decided to use them for a film he was supervising, “Forbidden Planet."

“He would look at the film and say, 'Now that needs music. I want to strengthen the fear in the situation. Can you do fear?' Well, that's all we could do, really, is fear," Bebe Barron said in a 2005 interview on National Public Radio.

The Barrons also collaborated on concerts and special effects for the Broadway shows “A Visit to a Small Planet," which debuted in 1957, and the “The Happiest Girl in the World" in 1961.

In 1962, they moved to Hollywood but never worked on another major film. One reason was the advent of commercial synthesizers, which with the push of a button could simulate sounds the Barrons once took weeks to complete.

An only child, Bebe Barron was born Charlotte Wind on June 16, 1925, in Minneapolis. Her parents, Frank and Ruth Wind, owned an Army-Navy surplus store in Fargo, N.D.

Her husband called her Bebe, pronounced “bee-bee," and she took it as her first name.

In Minneapolis, she met Louis Barron in 1947 while dating his brother but “wound up with Louis, the more creative, exotic and bohemian" brother, her son said.

Even after divorcing in 1970, the couple continued to collaborate until his death in 1989.

She did not compose again until 2000, when she began working on “Mixed Emotions," based on recordings she made on a synthesizer at UC Santa Barbara. To Barron, her final piece “sounded like a continuation" of her work on “Forbidden Planet," completed nearly 50 years before.

In addition to her son, Barron is survived by her husband, screenwriter Leonard Neubauer of West Los Angeles.