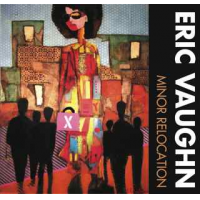 Eric Vaughn has devoted most of his life to jazz, but recognition for his distinctively personal music has long eluded him. Vaughn’s luck can be expected to turn, however, with the release on August 7 of Minor Relocation, the 58-year-old pianist/composer’s first nationally distributed album.

The new CD, released on his Vaughn Music label, serves as an introduction to a fresh and intriguing voice on the piano. Vaughn describes his music, which fuses elements of Thelonious Monk, Art Tatum, McCoy Tyner, and others, as “hard bop to modern-esque.” “I’ve definitely learned from the traditional players,” he says. “I’ve taken from a little bit of everybody and I’ve taken some classical and I’ve put it all in there.”

The “minor relocation” of the disc’s title refers to the pianist’s 2009 move back to the Bay Area from Seattle, where he’d resided the previous 12 years. Vaughn recorded the CD over a three-year period in both locales, working in Seattle with bassists Nate Omdal and Mark Bullis and drummers Nicholas Quitevis and Jamiel Nance, and in the Bay Area with tenor saxophonist Bob Kenmotsu, bassist John Wiitala, and drummer Kent Bryson. “I hadn’t seen them in 35 years,” Vaughn says of the three latter musicians, with whom he once worked in San Francisco’s North Beach.

Most of the CD’s repertoire consists of Vaughn’s striking originals, including the swinging title track, the minor-blues-based “Tune for Trane,” and the bossa ballad “Joyce,” as well as his takes on “Stella by Starlight,” “Alone Together,” and “On Green Dolphin Street.”

Bronx, NY-born Eric Vaughn grew up in Greenwich, Connecticut, where he moved at age 7 with his mother and stepfather, a semi-professional musician. When Eric was 9, both he and his stepdad began taking piano lessons from Sal Mosca, the Lennie Tristano disciple noted for his recordings with Lee Konitz, among others. The younger Vaughn continued his studies till he was 14, when basketball became a primary focus.

A basketball scholarship brought Vaughn to the University of San Francisco, but knee injuries thwarted his athletic ambitions. He applied for, and won, a music scholarship, despite having been away from his musical studies for nearly five years. Vaughn went on to earn his Bachelor’s degree in music and a Master’s in music performance, both from USF. Several years of classical piano lessons during this time “influenced my technique for sure and my ideas as well,” he says now. “It’s useful for improvising and my chops and reading.”

Vaughn spent two years in the early ’80s playing in Europe with bassoonist Michael Rabinowitz, another former Mosca student, then moved to Oakland and became part of a circle of avant-garde players that included saxophonists Ghasem Batamutu and Julius Hemphill, trumpeter Rasul Siddik, and bassist James Lewis. In 1985 he moved to Vancouver, BC and remained there for 12 years, performing regularly at the Vancouver International Jazz Festival and working a steady club engagement with trumpeter Gabriel Mark Hasselbach. He also spent two years in the early ’90s touring as a member of former B.B. King bassist Russell Jackson’s blues band.

During his years in Seattle (1997-2009), Vaughn played with his own groups and those led by tenor saxophonist Bert Wilson and conga drummer Billy Poindexter (son of Pony Poindexter). He recorded three little-noticed albums—a solo piano date titled Reflections: Past and Present; the trio session A New Beginning; and The Chaotic World We Live In, on which he overdubbed piano and melodica parts. With Poindexter’s quartet, he recorded Live at the Birkshire (2007).

Vaughn’s “minor relocation” back to the Bay Area in 2009 marks an exciting new chapter in his musical life. A Kickstarter campaign is supporting the release of his new CD, and higher-profile gigs are coming his way. To celebrate the release of Minor Relocation, Vaughn and his quartet (Bob Kenmotsu, John Wiitala, Kent Bryson) will be performing at 142 Throckmorton Theatre in Mill Valley on Thursday 8/9 at 8pm. He’s also set to appear at Rasselas in San Francisco on Wednesday 8/15 at 8pm, and at Piedmont Piano Company in Oakland on Saturday 10/13, 8pm, with more bookings in the works.