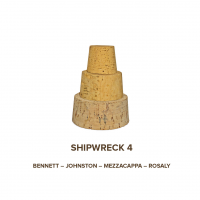 slideshow
Shipwreck 4 celebrates the first quartet meeting of San Francisco Bay Area improvisers Darren Johnston, Aaron Bennett and Lisa Mezzacappa with Chicago drummer Frank Rosaly. Johnston, a major figure in the Bay Area music scene, has nonetheless retained close ties to Chicago’s jazz community, and made the introductions here—the group assembled to play a set at a San Francisco Monday night music series, and decided right afterwards to book a recording session that weekend. Fueled by the combination of longtime musical friendships and the excitement of the unknown, the music in this session is full of surprises, floating and soaring, embracing lyricism and texture, off-kilter grooves and full-on freakouts.

Rosaly, praised for his “sharp sense of time, imaginative vocabulary, and a knack for knowing just what a given context requires” (Chicago Reader) is among the most creative voices in Chicago improvised music, leading his own projects and collaborating with peers and luminaries such as Bobby Bradford, Rob Mazurek, Jason Stein, Thurston Moore, Jeff Parker, Nels Cline, Matana Roberts, and Nicole Mitchell, among many others. He and Mezzacappa share a playful, interactive rhythm section sensibility that moves the music forward in unexpected ways and bursts into the foreground when inspiration strikes. Johnston and Bennett sculpt stunning melodies from thin air, creating rich pads of sound one moment, and darting in and out of frenetic noisy textures the next.

Named for Shipwreck Studios, the Oakland, CA studio where the group recorded and which was destroyed in a fire two months after the session, Shipwreck 4 is a remarkable conversation between two vibrant creative music scenes which seem to have a lot to say to each other.