SOURCE: ALL ABOUT JAZZ PUBLICITY
May 11, 2010
Sign in to view read count 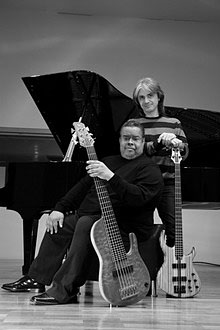 slideshow
It may come as a surprise to anyone wading through bass guitar giant Anthony Jackson's discography, which mind bogglingly totals over three thousand recordings, that he has never recorded a solo album. The legendary bassist--who has played with an astonishing variety of artists of the caliber of Chick Corea, Roberta Flack, the O'Jays, Buddy Rich, Paul Simon, Chaka Khan, Michel Petrucciani, Michel Camilo, Pat Metheny, Quincy Jones, Steely Dan and Wayne Krantz to name but a small number--has simply never valued his compositional skills sufficiently to cut a record of his own. Not even Quincy Jones could persuade him otherwise. Jackson though, has never been one to crave the limelight and, in forty years as a bass guitarist behind some of the greatest names in modern music, he has taken only a handful of recorded solos.

A trip to Greece in late 2007 to play a concert--surprisingly, his first visit to this country in four decades as a professional musician--would result in Interspirit (Abstract Logix, 2010), the first recording to which he has put his name as a leader/co-leader. Oddly, perhaps, it is collaboration with a fellow bassist, Yiorgos Fakanas, who's also a busy composer. The resultant music of this meeting is, broadly speaking, fusion music; the best of Greek jazz musicians combining with heavyweights of the genre like Frank Gambale, Dave Weckl and Mitchel Forman.

AAJ's correspondent in Laos, Ian Patterson, spoke with both Jackson and Fakanas, about the recording of Interspirit, and how two monster bassists can not only work together to create a whole greater than the sum of its parts, but avoid the pitfalls of excess through keen ears, compositional focus and a collaborative spirit.