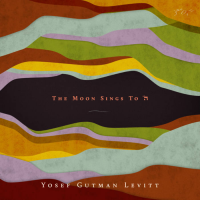 Accomplished Bassist, Composer, and Arranger Yosef Gutman Levitt has released an innovative double album. The Sun Sings to Hashem and The Moon Sings to Hashem create a powerful intersection between the Jazz and Hasidic Jewish music worlds. A graduate of the world-renowned Berklee College of Music, Levitt took a hiatus from music to focus on a thriving career in high-tech, which included creation of the highly successful platform Mad Mimi. Making his foray back into music, Levitt ties dynamic Eastern and North African threads to the vast expanses of sophisticated Jazz; presenting the richness of Hasidic music with an innovative approach.

Levitt grew up in the multicultural concourse of South Africa, studied in the diverse city of Boston, and lives in Israel neighbored by people whose roots span the globe. Like the convergence of The Silk Road, Levitt’s arrangements introduce ethnic traditional, acoustic, and contemporary instruments and orchestration, played by musicians Levitt personally curated from Israel and abroad.

Partnering with fellow Berklee graduate and saxophonist Gilad Ronen, who serves as co-arranger, Levitt merges his influences as he approaches these niggunim—songs without words- and arrangements that appeal to discerning Jewish audiences, Jazz aficionados, and the music community at large. The Sun Sings to Hashem and The Moon Sings to Hashem are available through all major digital retail outlets.