SOURCE: ALL ABOUT JAZZ PUBLICITY
May 19, 2008
Sign in to view read count 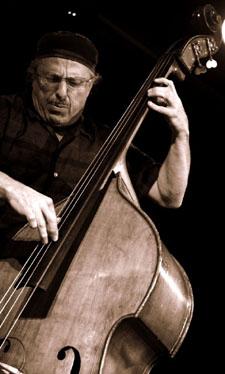 slideshow
Bassist Joe Fonda has nourished so many groups and projects with his unerring time, deep and constant imagination and rich tone that one struggles to imagine a New York jazz scene that doesn't include him. He's played as a sideman with dozens of great, prominent players (including Anthony Braxton, with whom he played in various musical combinations for 15 years) and has led, and still leads, a number of his own groups--none of them less than worth hearing, and most of them excellent. He's perhaps best known for his co-leadership with pianist Michael Jefrey Stevens of the Fonda/Stevens Group, a band that's produced marvelous work for 15 years.

Fonda's an interesting combination of qualities in that he's both a master of totally free improvisation and a fine composer of vigorously (if uniquely) structured compositions. Actually, that might not be such a paradox, since it may well be what Fonda calls his “architectural" approach to composition that makes his improvised playing so disciplined and structured.

AAJ Contributor Paul Olson spoke at length with Fonda, for an interview that says more about his projects, recordings and philosophies than any introduction ever could.