Being a great composer means having great people play your music. These were the players I had in mind when I wrote the album, and there isn't anyone else I would even consider playing on the recording. 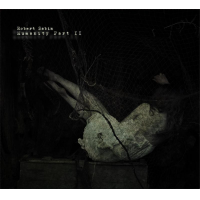 “I love the way film music invokes states of mind that you carry from the film, things beyond the music itself,” says Sabin, whose 2007 album, Romero, grew out of his obsession with the zombie thrillers of George A. Romero (Night of the Living Dead), and whose debut, Killdozer (2005), was about a deranged man and a heavily armored instrument of destruction. “I enjoy taking a theme from a horror movie and getting more juice out of it, really going deeper inside it.”

Sabin’s exceptional tentet for Humanity Part II includes some of the finest players and fellow composers on the New York scene, including guitarist Jesse Lewis, saxophonists Aaron Irwin and Jason Rigby, trumpeters Dan Urness and Matt Holman, hornist Chris Komer, trombonist John Yao, tubaist Ben Stapp, and drummer Jeremy Noller. “Being a great composer means having great people play your music,” says Sabin. “These were the players I had in mind when I wrote the album, and there isn’t anyone else I would even consider playing on the recording.”

The title track fuses together two Ennio Morricone themes composed for John Carpenter’s 1982 remake of The Thing, formerly arranged for synthesizers. “Through a Glass Darkly,” inspired by legendary Swedish director Ingmar Bergman’s early-’60s trilogy, is a three-part study in existentialism—in loneliness and silence.

“Tenebre,” an understandably unsettled work, is named after the 1982 film by Italian horror master Dario Argento, whom Sabin admires (among his more delicate touches) for “his beautiful use of color and style, natural and unnatural.”

Humanity Part II’s most haunting piece, “Scarecrow,” is based not on a film theme but elements of Ravel’s masterpiece Gaspard de la nuit. Signifying a hanged man dangling against the horizon, a repeating note chimes ostinato-style in the far background.

“Chromatic brooding permeated with silence”—that’s how Sabin describes his basic approach. For all that, the music is fully alive and unexpectedly affecting in taking you places you haven’t been before.

Born on October 27, 1972 in Portland, Oregon, Robert Sabin studied saxophone in elementary school and played in the fifth-grade band. He took up electric bass in high school and was soon exploring basic elements of jazz and contemporary music, inspired by his growing affinity for the instrument and its role in an ensemble.

His first serious exposure to improvisation came when he attended New York University as an undergraduate. After belatedly transferring into the music department, and then gaining admission to the jazz program, he worked hard with his esteemed instructor Mike Richmond and, after graduation, with another distinguished bassist, Michael Moore. Later studies would include work with Mark Helias, Michael Formanek, and Jay Anderson, eventually playing with a long list of notable veterans including Oliver Lake, Jean-Michel Pilc, Peter Bernstein, Dick Oatts, Kenny Werner, Brian Lynch, and Dave Liebman.

Sabin acquired his graduate degree at the Manhattan School of Music before heading back to NYU for his doctorate. He did his dissertation on bassist Gary Peacock, an underrated artist in Sabin’s estimation: “He is such an intuitive artist. He’s not about technique or chops. When he taught me, it was more about what things you can do to avoid getting in your own way.”

Dr. Sabin serves on the faculty of Hunter College High School and has worked with the Manhattan School of Music Precollege as well as directed the Jazz Program at the New York Summer Music Festival and Institute. He was awarded second place in both the 2001 and 2003 International Society of Bassists’ Jazz Competitions.