SOURCE: TWO FOR THE SHOW MEDIA
February 6, 2010
Sign in to view read count 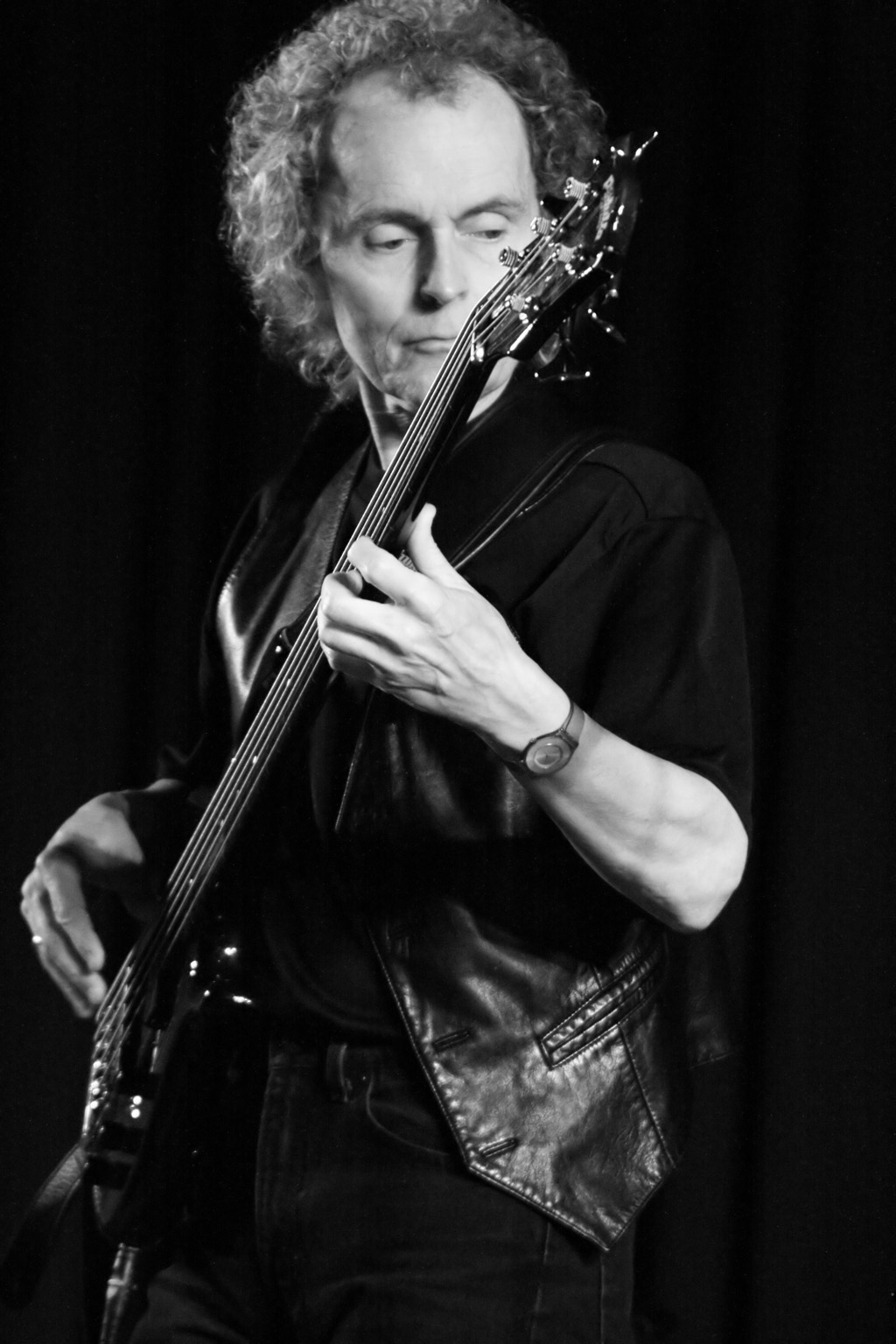 One of the premier electric bassists of contemporary jazz, Mark Egan has distinguished himself over the past thirty years as an in-demand session player, valued sideman, prolific composer and respected leader in his own right.

While Egan has been noted for his remarkably melodic fretless bass work since his days with the Pat Metheny Group (1977-1980), the groove-oriented Truth Be Told represents another aspect of his playing. “Before I joined the Pat Metheny Group I was playing mostly R&B in New York - both live in clubs as well as in the studio," he recalls. “When I first came to New York I was the original bass player in the 24th Street Band, which was a progressive groove playing band with Steve Jordan on drums, Hiram Bullock on guitar and Clifford Carter on keyboards. I wasn't focused on playing fretless bass at the time and was heavily influenced by groups such as Weather Report, Miles Davis, Herbie Hancock, The Brecker Brothers, David Sanborn, Stuff and everything that was happening in the mid '70s on the New York Scene."

Egan goes on to explain “I had a strong foundation in Jazz, R&B and funk from my playing experiences in Miami as well as from studying and playing with Jaco Pastorius. He introduced me to great groove bass players like Bernard Odum of the James Brown band and Maceo and the Kings Men, Bootsy Collins with James Brown and James Jamerson who was the bassist for most of the classic Motown recordings. These influences are an important part of my background, though some listeners wouldn't know it since my previous solo recordings focus more on the lyrical and melodic side of my playing."

Egan reveals additional motivation for wanting to deal more in funk and fusion on Truth Be Told was the potential of having Vinnie on the session. “I wanted to record more groove-oriented music with a progressive edge. I wrote with him in mind, creating some rhythmic vamps at the end of certain pieces that Vinnie could really stretch over. And he just killed it!"

Colaiuta unleashes with a fury at the tag of the urgent jamming vehicle “Blue Launch" and also on the powerhouse “Rhyme or Reason," which features an incendiary tenor sax-drums breakdown with Bill Evans that elevates the track. Elsewhere, Colaiuta ignites the hard-hitting, odd-metered “Pepe" with his highly charged drumming, slams with authority on the funky title track and expertly grooves the soulful Stuff-influenced opener “Frog Legs" as well as the highly syncopated “Caf Risque." Adds Egan, “I also wanted to make sure I had a lot of stretching room in these compositions for Bill and Mitch, who are both such great soloists, while also leaving room for my soloing and groove interplay."

He succeeds on all counts, creating music that is brimming with challenging, tightly executed heads yet full of urgent, free blowing solos. Evans distinguishes himself throughout with typically inspiring solos on both tenor and soprano saxophones while Forman deftly alternates between piano, Fender Rhodes and synths to provide a myriad of colors, textures and thoughtful orchestrations, along with some heated solos of his own.

Egan grooves mightily throughout on fretted bass while his distinctive fretless resounds with singing tones on the soothing, Elements styled “See Saw," the romantic Mitch Forman ballad “Shadow Play," the lyrical “Blue Rain" and the introspective, Indian flavored closer, “After Thought." “The overall tone of this record has a more aggressive attitude than some of my past recordings. I didn't want to put any limitations on this project because all of the players are incredibly talented soloists and leaders in their own right. I just wanted Bill, Vinnie and Mitch to have as much freedom as possible within the compositions and let the pieces fall where they may."

Mark Egan is considered to be one of the most respected and in-demand electric bassists on the music scene today. His unique fretless bass sound and style is both distinctive and versatile and his musical contributions incomparable. With three platinum & three gold albums to his credit, Mark has recorded with the likes of the Pat Metheny Group, Sting, Arcadia, Roger Daltry and Joan Osborne; performed with the Gil Evans Orchestra, Marianne Faithful, David Sanborn, John McGlaughlin and Sophie B. Hawkins and has added his musical prowess to such movies and television shows as; Aladdin, The Color Of Money, A Chorus Line, NBC Sports, ABC's All My Children, CNN/Headline News and numerous award winning television commercials.

Born in Brockton, Massachusetts, Mark began his musical studies on the trumpet at the age of 10, mainly through the influence of his father who was an avid player. He continued to play the trumpet through high school in jazz bands, R&B groups, the high school orchestra and started playing bass at age 16. He enrolled in the University of Miami School of Music under the direction of Jerry Coker and studied privately with the late, great Jaco Pastorius whose influence remains with him to this day. “When I heard Jaco play it made me aware of what could be done on the electric bass, particularly with regard to grooving and soloing - - Jaco just made me aware of another way of thinking about the bass and music."

While in Florida Mark formed a band with fellow University of Miami students; Clifford Carter (keyboards), Hiram Bullock (Guitar), Billy Bowker (Drums) and Phyllis Hyman (vocals). They came to New York in 1976 and soon afterward, Mark hooked up with the Pointer Sisters, Deodato and David Sanborn. Mark's notoriety was gaining and he quickly caught the eye of U of Miami School mate, Pat Metheny - joining the group in 1977. It was through this association that Mark would team up with Metheny drummer, Danny Gottlieb and go on to form the group Elements. To this day, Elements is one of the most highly acclaimed experimental contemporary jazz groups in the world.

The band has recorded over eight full-length albums and have toured in over twenty-seven countries. Their uncompromising live sound continues to be on the forefront of the jazz music scene. While Mark continues to work with Elements and hold down the chair in the Gil Evans Orchestra (a position he has held for over thirteen years), his solo projects represent a more personal side of his musical makeup.

Mark continues his recording and touring efforts which recently included studio performances with Joan Osborne, Michael Franks, Marianne Faithful, and tours with; Elements, Bill Evans, Pat Martino, Larry Coryell and the CTI All Stars. Egan's passion and visionary approach to contemporary instrumental music led to the creation of his independent record label, Wavetone Records, which he formed in 1992 and his recording studio, Electric Fields. Wavetone has released several recordings to critical acclaim, including Elements' Far East Volume I and II, Elements' Untold Stories, Joe Beck's Finger Painting, Jeff Ciampa's Signs of Life and House of Mirrors, the Jeff Laibson/Mark Egan/Danny Gottlieb project Trio along with Egan's 2001 outing Freedom Town, his 2006 follow up As We Speak and reissues of his 1985 landmark, Mosaic, as well as the Brazilian influenced Beyond Words. Projects already in production include Element's long awaited studio album as well as a Duo recording featuring Mark and Danny Gottlieb.

Mark continues to explore new sound territories through his extraordinary recording, composing and touring activities. His successful efforts as a musician, producer and label manager keep him on the forefront of the contemporary music scene.