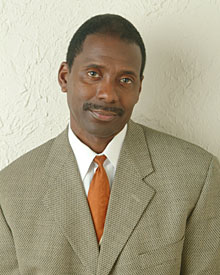 The Avery Sharpe Trio Live is the new release from bass great and long time band mate of McCoy Tyner, Avery Sharpe. The recording is a live date from the WGBH Fraser Performance Studio on October 15th, 2008. Included on the new release are musical contributions from Avery Sharpe, Onaje Allan Gumbs, Oscar Hammerstein, McCoy Tyner and Yusef Lateef. Sharpe's trio is made up of Onaje Allan Gumbs on the piano and Winhard Harper on drums. Sit back with Avery and friends and check out one of the coolest live recordings of 2010.

“Even in these times of extraordinary bass players, Sharpe stands out." -Leonard Feather, Los Angeles Times

“Forget about categories like mainstream and fusion and neobop ... because if there's one thing you can say about Avery Sharpe, it's that there's no label worth hanging on him except musician. And at that, he's extraordinary."-- Gene Santoro

Bassist Avery Sharpe was born in Valdosta, Georgia. He studied economics at the University of Massachusetts while he played electric bass in gospel, funk, and rock groups. With encouragement from renowned bassist Reggie Workman, he learned acoustic bass and soon was performing with Archie Shepp and Art Blakey. In 1980, Sharpe won a spot in McCoy Tyner's group and worked with him for the next 20 years, playing hundreds of gigs and appearing on more than 20 records. Sharpe's credits also include sideman stints with jazz greats from Dizzy Gillespie to Pat Metheny. His first recording as a leader was the 1988 album Unspoken Words on Sunnyside Records. In 2005 he recorded Dragon Fly with Winard Harper and Onaje Allan on his own label, JKNM Records. His latest JKNM release is Legends and Mentors--the Music of McCoy Tyner, Archie Shepp and Yusef Lateef (2008).

Sharpe is equally adept at songs and longer compositional forms. In 1989, he wrote and conducted the soundtrack for the movie An Unremarkable Life. A decade later, his six-movement piece America's Promise debuted with the Springfield Symphony Orchestra. In the 1990's Sharpe received a commission by the classical group Fideleo to write three extended works. In 2004, he wrote a musical portrait for the stage for Chamber Music Plus. This toured in 2007-2008, featuring the actress Jasmine Guy and Sharpe's Trio. In 2006, he was commissioned by the Springfield Symphony to write a Concerto for Jazz Trio and Orchestra, which premiered in the 2007, featuring the Trio with Kevin Eubanks on acoustic guitar.

Avery Sharpe's extensive educational activities include numerous clinics and workshops at home and abroad. He has presented at the University of Massachusetts, Williams College, Berklee School of Music, Bates College, the University of Miami, and at colleges in Peru, Brazil, and elsewhere. His awards include The NAACP Martin Luther King Jr. Special Achievement Award, several National Endowment for the Arts Grants and the NEFA 1997 Achievement in Jazz Award. Sharpe's last trio recording, “August Moonlight" on JKNM Records, featured Onaje Allan Gumbs and Winard Harper. The new live release catches this same trio in its purest form.