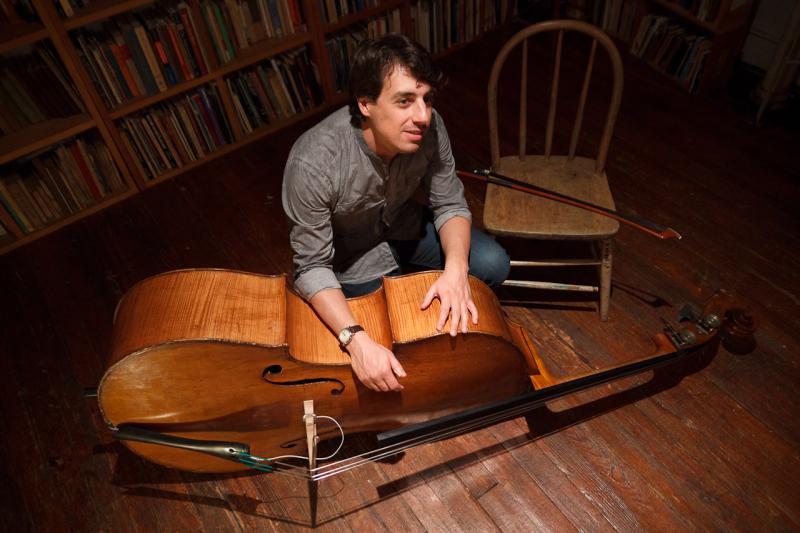 slideshow
Bassist Andrea Veneziani followed his musical dreams from Rome to New York in the summer of 2009, and those dreams are made manifest with the release on March 13 of his ravishing debut CD Oltreoceano ("Overseas"). A trio session with pianist Kenny Werner and drummer Ross Pederson, the disc is a striking introduction to the gifts of this Tuscan-born bassist and composer.

“Kenny is one of the major pianists who operates in trio settings today," says Veneziani of Werner, who was an instructor in the bassist's NYU Master's program. “I like his playing, very sensitive and creative, a true improviser." Pederson, a rising young drummer on the New York scene, “knows how to shape the music, which was essential for me, because of the nature of my compositions."

Those compositions include two ("Night Flight," “In Viaggio con Te") inspired by his travels, which included a July 2010 tour of Costa Rica; “Traffico," for which Veneziani composed only the melody, with the remainder of the performance free-form; and the minor-key “Mark Rothko," for the late American abstract painter. Three short interludes—"Free Episode #1," “Free Episode #2," and “Free Episode #3"—were improvised in the studio by Veneziani, Werner, and Pederson without advance planning, other than the moods requested by the bassist beforehand.

The nonoriginals are from the oeuvres of three jazz icons: Charlie Parker ("Segment"), Thelonious Monk ("Pannonica"), and Bill Evans ("Time Remembered"). Evans's influence can be felt in the effortlessly floating interaction between Veneziani, Werner, and Pederson, not just during “Time Remembered," but throughout Oltreoceano.

“It's really about interplay," the bassist says. “I had listened to a lot of Bill Evans's piano trio recordings during my years of studies. Bassists in those kinds of groups have more space—Scott LaFaro, Marc Johnson, all the bass players who played with Bill Evans always had the chance to play longer solos and counterpoint lines. You have more space and you can also break a bit the typical role of the instrument. I was always attracted to that."

Andrea Veneziani was born April 21, 1977, in Pescia, Italy, a small town in Tuscany. At 15 he moved with his family to Rome and by 19 had taken up electric bass, initially inspired by Flea of the Red Hot Chili Peppers and other funk bass players. He gradually developed an interest in jazz and began studying acoustic double bass, “transfer[ring] all the technique I already had from the electric to the double bass."

Veneziani studied at jazz clinics like Siena Jazz and at the Conservatory of Music Licino Refice in Frosinone, Italy, where he was awarded an Advanced Academic Diploma in 2007. From 2004 until leaving Italy in 2009, Veneziani performed at jazz festivals all over Italy, and was also active as a composer and arranger in many different settings, from jazz to theater and film.

The bassist arrived in New York in the summer of 2009 on a scholarship from the Fulbright Commission for Educational and Cultural Exchange between Italy and the United States. He was enrolled at New York University's Steinhardt Department of Music and performing Arts Professions, from which he graduated in May 2011 with a Masters of Music Degree in Performance with a Concentration in Jazz. His teachers at NYU included Joe Lovano, Chris Potter, John Scofield, and Kenny Werner, his trio-mate on Oltreoceano.

Veneziani is in the process of planning a fall 2012 tour of Italy with an American trio. Meanwhile, the Harlem resident stays busy with teaching (private students as well as at the New York Jazz Workshop) and performing engagements with various bands, including his own trio. “I'm playing a lot here," he says of New York, “and better, because the level is higher. You can always play with good musicians. You can always meet new musicians from all over the world. Music here is really alive."