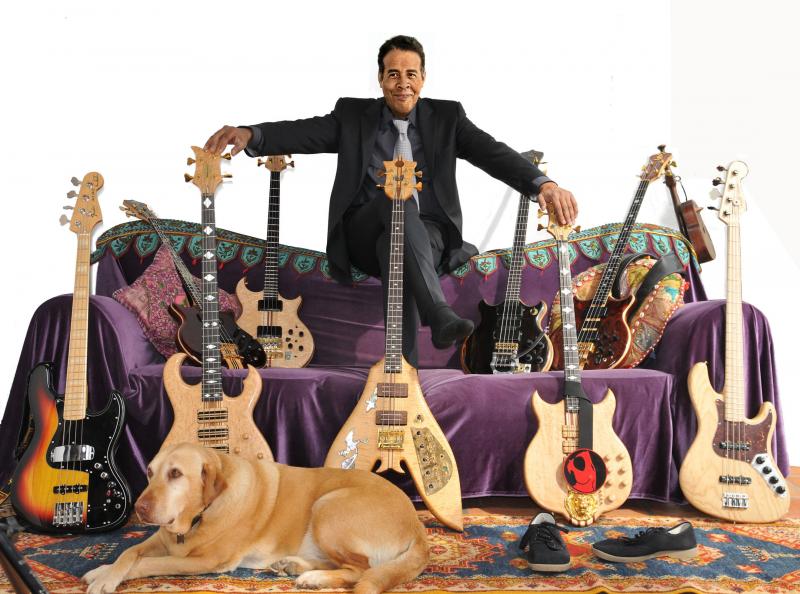 slideshow
Stanley Clarke was honored at the Montreal Jazz Festival with the 18th prestigious Miles Davis Award in 2011. This award is presented to tribute a great international jazz musician for the entire body of his or her work and for that musician’s influence in regenerating the jazz idiom. An extension of the award is the privilege to host a four-night Invitation Series of his choice. Clarke’s Invitation Series at the festival will take place this year June 28-July 1.

“In addition to being honored with the Miles Davis Award last year, I was even more surprised when I was invited to come up with four shows that I could pretty much put together as I wanted. Of course, I would have loved ten shows. I went crazy with ideas,” reflects Clarke.

“This is such an exciting opportunity. My career has always been about a celebration of the bass and its possibilities. I’ve continually tried to present the bass in many different and unexpected ways and the concerts I’m planning for the Invitation Series are a further expansion of this.”

The first concert 8:00pm. Thursday, June 28, at the Theatre Jean-Duceppe of Place des Arts will be an acoustic duet with the high-energy pianist Hiromi in “An Accoustic Evening with Stanley Clarke and Hiromi." In September of this year, Clarke and Hiromi will be performing at New York’s Blue Note and in Boston

“A pairing of only bass and piano is somewhat unusual,” Clarke says. “This duet with Hiromi is certainly an example of ‘less is more.’ I’ve performed with Hiromi as an acoustic duet approximately twelve times and it’s always been met with incredible audience reaction. It’s great fun for me in that Hiromi and I tend to feed off of each other’s artistry. We enjoy the tightness of the improvisation so much that 90-minute concerts inevitably extend to at least two hours.”

The next evening, 8:00pm, Friday, June 29, also at the Theatre Jean-Duceppe of Place des Arts, Clarke and the Stanley Clarke Band will participate in an exciting concert with the renowned Harlem String Quartet. This performance will encompass an innovative fusion of classical music and jazz. It so happens that Clarke is currently working on a classical bass album to be released later in the year.

“Classical acoustic strings are something I grew up with. I’ve had plans to jump into this world for sometime and have written lots of arrangements.” Clarke continues, “Much of jazz music is not just the notes, but the actual sound represented. Here the drums will be light. Notes meant for the piano in a song like ”No Mystery” will go to strings. It should be interesting, inventive and most of all fun.”

The third concert is an extraordinary master bass summit with SMV, aka Stanley, Marcus Miller and Victor Wooten. This takes place at Theatre Maisonneuve of Place des Arts on the festival grounds. Saturday, June 30 at 9:30pm. Each of the bass players are at the top of their game and all are innovators in their own right. SMV toured in 2008 and a subsequent well-received album, “Thunder," came out of the tour. The audience will be awed at the virtuousity and amazed at the musicality and individuality of the three bass players’ performing together.

The final concert of the Invitation Series is with his own Stanley Clarke Sunday, July 1, 8:00pm, Theatre Maisonneuve of Place des Arts. Keyboardist Ruslan Sirota and drummer Ronald Bruner Jr. have been touring with Stanley for over six years. Along with Stanley they won 2011 Grammy Award for Best Contemporary Jazz Album, “The Stanley Clarke Band." Guitarist Charles Altura will be joining them. Altura also performed on the Grammy Award-winning album.

“What can I say about the Stanley Clarke Band? They’re soldiers. I love these guys,” remarks Clarke. “It’s been a rewarding experience to watch these young players grow. I’ve wanted to give them the apprenticeship and opportunities that people like Art Blakely and Horace Silver among others gave me. Now I believe Ruslan and Ronald are capable as individuals to go out on their own...but, I hope they stay with me for awhile yet. They keep my spirit young.”

Composer, arranger, producer, bandleader and performer Stanley Clarke is celebrating forty-plus years as a consummate bass musician. He was the first bass instrumentalist to headline tours and has been sought out by the likes of Jeff Beck, Ronnie Wood and Keith Richards for numerous projects. He is a composer and arranger of over 60 film and television scores including “Boys N the Hood," “What’s Love Got to Do With It," “Romeo Must Die" and “Transporter."

Celebrating 31 years, Festival International de Jazz de Montreal is the biggest jazz festival in the world. The Montreal Jazz Festival annually offers about 500 concerts, of which three-quarters are free of charge, hosting about 2000 musicians, give or take a few, from over 20 countries. 2 million visitors arrive from all over the planet to an event, which has become the International Jazz rendez-vous and a laboratory for the creation of new talent.

This story appears courtesy of .
Copyright © 2020. All rights reserved.