I’m incredibly honored to be a part of the new NMAAHC and included in their historical view of African American music. Beyond that, I’m extremely humbled to be among all of the other African Americans represented, who embody our history, struggles and achievements. 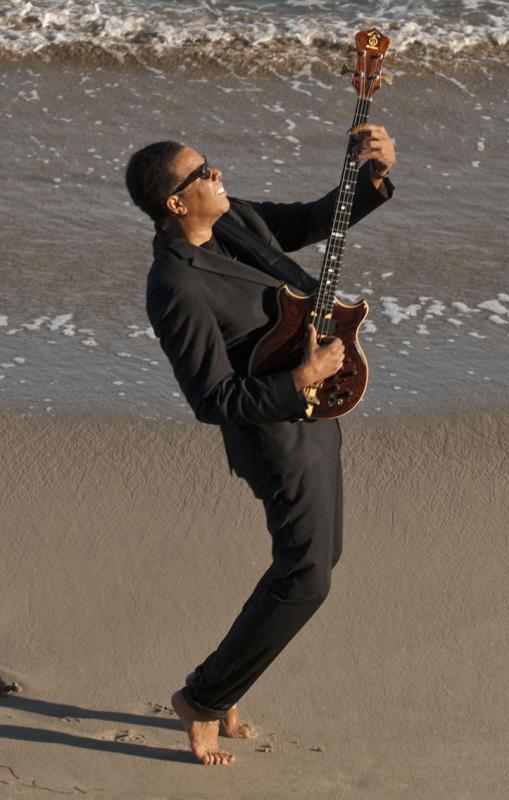 slideshow
The opening of the new Smithsonian National Museum of African American History and Culture (NMAAHC) September 24 in Washington DC will be particularly exciting for legendary bassist Stanley Clarke. Not only is one of his Alembic basses and archival photos included in the museum exhibit, but he is participating in the opening festivities, Freedom Sounds: A Community Celebration. Clarke will attend the opening dedication ceremony and then give a free Bass Workshop at the Fannie Lou Hamer Stage on the Washington Monument Grounds at 2:00pm.

“I’m incredibly honored to be a part of the new NMAAHC and included in their historical view of African American music,” remarks Clarke. “Beyond that, I’m extremely humbled to be among all of the other African Americans represented, who embody our history, struggles and achievements. I’m thrilled the museum is opening. It’s long overdue. And, the Smithsonian certainly knows how to do it best. I can’t wait to visit the museum myself this weekend.”

The day will be the culmination of a five-year journey for Clarke with the NMAAHC. In 2011 Clarke was approached by the yet to be constructed museum to donate items of his memorabilia that represent his musical legacy. He was informed that the donations are for a gallery dedicated to the history and impact of African American music as an American phenomenon. The music gallery, a part of the cultural section of the museum, highlights African American interpreters of musical styles and traditions, stories, individual accomplishments and social progress.

Clarke, a fan of the Smithsonian’s many museums since his youth, was greatly honored by the invitation and set about selecting items he deemed representative of his career. He chose two basses, an acoustic and electric bass, archival photos and definitive career albums. The proposed donations were vetted by a collections committee and approved. The museum has chosen to display one of Clarke’s signature Alembic electric bass.

Along with other dignitaries, Clarke will attend the dedication ceremony where President Obama will cut the ribbon officially opening the museum. He will then conduct a 45-minute bass workshop at 2:00pm. Clarke does bass clinics and workshops at universities and other institutions yearly and enjoys passing along his knowledge of the instrument. This one will be unique in that it’s open to the general public.

Music education has always been a topic Clarke advocates. He came up through a strict classical bass education in Philadelphia and credits this background to his success as a consummate musician. He is participating in the “jazz tradition” of passing along his knowledge to others. Clarke and his wife Sofia established The Stanley Clarke Foundation thirteen years ago as a charitable organization, which offers scholarships to talented young musicians each year.

Clarke’s credentials have certainly deemed him worthy of a place in the spectacular new museum. A four-time Grammy Award winner, nominated 13 times, he is undoubtedly one of the most celebrated acoustic and electric bass players in the world with a career spanning over 45 years. What’s more, Clarke is equally gifted as a recording artist, performer, composer, conductor, arranger, producer and film score composer. He is a true pioneer in jazz and jazz-fusion movement.

His history with many of the traditional jazz greats is significant and in the museum he will be among many musicians he has worked with and admired. Fresh out of the Philadelphia Academy of Music, barely out of his teens, Clarke arrived in New York City and immediately landed jobs with famous bandleaders such as Horace Silver, Art Blakey, Dexter Gordon, Joe Henderson, Pharaoh Saunders, Gil Evans and Stan Getz among others. He was recognized for his sense of lyricism and melody, which he had distilled from his bass heroes Charles Mingus, Scott LaFaro and others, as well as non-bass players like John Coltrane.

A pioneer at 25, Clarke became the first jazz-fusion bassist in history to headline tours, sell out shows worldwide and craft albums that achieved gold status. He was also the first bassist in history to double on acoustic and electric bass with equal virtuosity, power and fire. In his ongoing efforts to push the bass to new limits, he invented two new instruments, the piccolo bass and the tenor bass.

In addition, Clarke has become one of the elite in-demand composers in Hollywood with well over 65 film and television credits to his name. As composer, orchestrator, conductor and performer he has scored such blockbuster films as Boyz ‘N the Hood, What’s Love Got To Do With It?, The Transporter and Romeo Must Die just to name a few. In 2014 he became a member of the exclusive Academy of Motion Picture Arts & Sciences.

The honor of being a part of the Smithsonian’s National Museum of African American History and Culture is a very unique and special one. To date Clarke’s creativity has been recognized and rewarded in just about every way imaginable: gold and platinum records, Grammy Awards, Emmy nominations, virtually every readers and critics poll in existence, and more. In 2011 he was honored with the highly prestigious Miles Davis Award at the Montreal Jazz Festival for his entire body of work.

The Fannie Lou Hamer Stage, where Clarke will have his workshop, is located on the north end of the Washington Monument Grounds on Constitution Avenue by The German American Friendship Garden. There are two entrances to the Grounds on 17th St., one on the south by Independence Avenue and one on the north side by Constitution Avenue. There is also an entrance on 15th St. by Jefferson Ave.