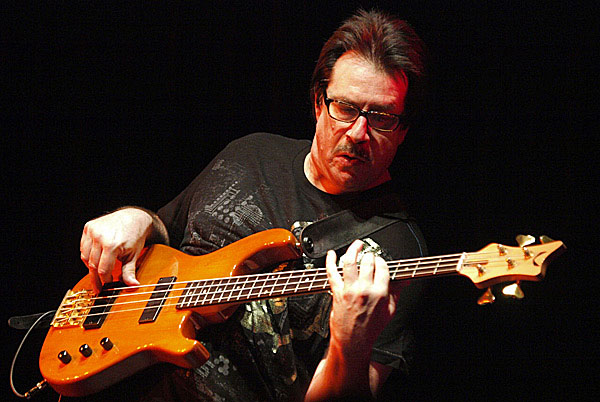 slideshow
Clearwater, FL—Insiders who have heard bass legend Jeff Berlin's newest CD are buzzing about the forthcoming release&#151a release that they are saying could possibly be the greatest bass album of all time! The word is that Jeff Berlin has recorded a jazz CD so astonishing that the artist himself is in shock with what he played! “I prepared for it by practicing 5 hours a day for weeks," Jeff explains. “What came of my preparation was to record solos on the bass that I believe have never been heard before from a bassist!"

Also included on these virtuosic recording sessions are Richard Drexler on piano and upright bass and legendary drummer Mike Clark, best known for his work with Herbie Hancock and the Headhunters, who had this to say about Jeff's new CD: “Everyone knows that Jeff is a virtuoso, but on his new CD he went past this! I've played with all of the great jazz bassists in the world and Jeff is at the top of my list. We locked from the first beat! The harmonic ideas that he played were unbelievable, and our time was astonishing. Jeff is the most forward-looking bassist I have ever played with. Jeff played like he wasn't afraid to take a chance at any moment—he played at the highest level without a net. There just isn't a CD like this one anywhere. He is a player's player, a total artist and it showed on our collaboration together!"

Jeff added that, “Richard and Mike made this CD happen! Without them I never could have had the support and interplay that pushed me to play what I played. Mike's time was swinging like a pendulum. And Richard is a freak: he actually played acoustic bass while I was soloing and then put it down to walk to the piano and take a solo. I don't know of anyone else who could have done what he did!"

Jeff Berlin's new CD, titled 'Low Standards' due to the performance of two bass players and Jeff's penchant for puns (his previous recording was called 'High Standards') is scheduled for release at the end of February 2012.