SOURCE: ALL ABOUT JAZZ PUBLICITY
April 24, 2009
Sign in to view read count 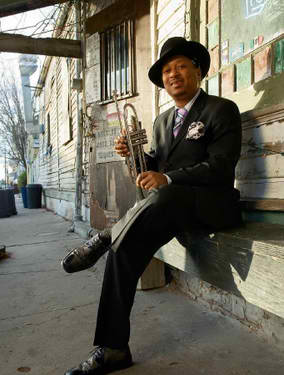 Kermit is currently acting in and consulting for new HBO pilot Treme, created by David Simon (The Wire).

Make no mistake, everything about Kermit Ruffins exemplifies New Orleans. Residing in the town of Treme, former home of his predecessors Louis Prima and Louis Armstrong, he continues the big brass tradition the town is known for--Kermit plays a “sweet, sweet horn," as Michael J. Agovino of Newsweek notes. His musical stylings resemble the culture of New Orleans, a melting pot, with Jazz, funk, standards and hip-hop. His charisma, both onstage and on his recordings, reflects the spirit of his city.

Kermit's love for New Orleans is not just shown in his music. He gives back to his city not as if a necessity or chore, but as a way of life. And Kermit's city embraces him the same way he embraces it. Kermit will be performing two dates during Jazz Fest. On April 25th he'll be taking center stage with his original outfit, the Rebirth Brass Band. On May 1st he'll be fronting his own band, The Barbecue Swingers, right before Tony Bennett. Kermit continues to shoot and consult for the new series Treme, from Emmy winning writer/producer David Simon (The Wire, Homicide). In fact, he has become one of pilots central characters.

Livin' A Treme Life, Kermit's 11th release, his 7th on Basin Street Records, is aptly named for what his music embodies--a town and lifestyle known for being rich in music and culture, essential to the city of New Orleans. Kermit's appreciation for his town is shown in his lyrics and his sound. His rich, raspy voice and the bright, clean blows on his horn will transport you right to the Big Easy. Enjoy the ride.