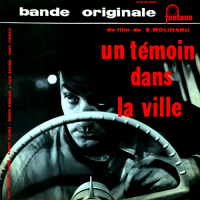 What's special about the music is the mood. While the Davis and Monk soundtracks are superb, they lack what this one has—the Parisian feel. Both Dorham and Wilen play with a nocturnal melancholy that settles on the score like a fog. Wilen plays smokey and blue on the saxophones while Dorham has a heartbreaking sound on trumpet, squeezing notes into tight places. Meanwhile Clarke's machine-gun drums creates suspense and Jordan's piano, particularly on Final Au Jardin D'acclimatation, unleashes cafe-society drama.

The common denominator on all three of these soundtracks is Wilen, who had a tender but aggressive technique and deep soul. His originals and playing give the music and films a lavish, sophistication. Also of note is Wilen's Jazz-Sur-Seine, an album that easily could have been a movie score. The album featured Wilen (ts), Milt Jackson (p), Percy Heath (b), Kenny Clarke (d) and Gana M'Bow (perc). Only 21 years old at the time, Wilen blows ambitiously with a Dexter Gordon edge throughout.