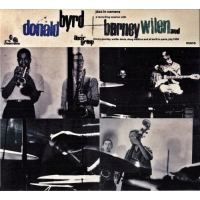 slideshow
In the summer of 1958, the Donald Byrd Quintet arrived in Paris to play at the Au Chat Qui Peche, a Left Bank jazz club. Also that summer, French saxophonist Barney Wilen was approached by film producer Sandro Bocola, who had an idea. In December 1957, Wilen had recorded with Miles Davis on the soundtrack to Elevator to the Gallows. Bocola wanted to make Jazz in Camera, an avant-garde film that would be an updating of Gjon Mili's Jammin' the Blues (1944). His vision was to film a group of hard-bop musicians recording an album of original music in Paris.

Bocola intended to have the music recorded first. Then the musicians would be filmed in the studio, with multiple cameras, replaying their original sound recording. The color film would then be cut to the original soundtrack. Bocola and his partner, Dennis Bailey, found a financial backer. All that was needed were musicians.

That task fell to Wilen. He turned to Byrd, who was accompanied by Walter Davis, Jr. on piano, Doug Watkins on bass and Al Levitt on drums. French guitarist Jimmy Gourley was added. The quintet assembled at the Philips Records studio. Their only instructions were to start with a quick piece, followed by a slow blues and another quick piece—A Night in Tunisia. The soundtrack was recorded in full in July and Raoul Coutard, a cameraman, was lined up.

Then the financial backer went bankrupt, making it impossible for Bocola to pay the lab to develop and deliver the film. The project was shelved, and shellac records of the soundtrack were stored at the homes of Bocola and Dennis. The musicians turned to other work, with Wilen and Byrd recording another film score, Jazz Sur La Croisette. Byrd went on to do an album with Dizzy Reece in London, Monica Zetterlund in Stockholm and live broadcasts in Paris before heading home to the U.S. in November.

That would have been the end of the story if not for Patrick Wilen. While assembling the musical legacy of his late father, who died in 1996, he came across the recorded soundtrack in the late 2000s at Bocola's home. The recording was released for the first time in 2011.

The blowing is hot and assertive, with Byrd flame-throwing blistering lines and Wilen matching the intensity with his persistent horn. And we have here one of the longest versions of A Night in Tunisia. While the concept of filming jazz musicians miming or running through their earlier recording in the studio seems deceptive and flat, it's largely the way all films and most TV handled performances at the time. It avoided the high cost of film re-takes due to musical mistakes.