This is a band that must be heard to be believed! —WFUV 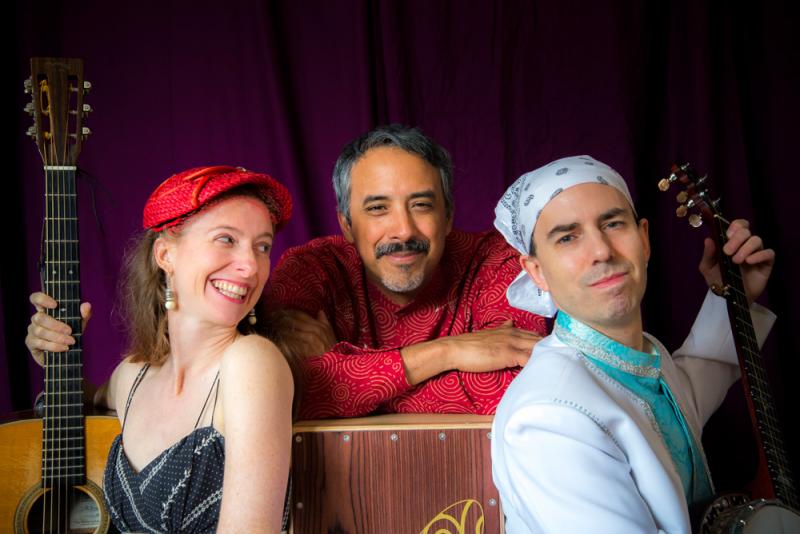 slideshow
Banjo Nickaru & Western Scooches are likely the only band today infusing elements of Gullah-Geechee and world rhythms with folk traditions, Americana, New Orleans influences, and 1920s jazz. The forthcoming sophomore album, Get Us Out Of Fearland , due June 15, builds upon the multicultural exuberance that made the band’s debut, Very Next Thing, a transcendent breath of fresh air. Elmore Magazine championed its “remarkable musical dexterity with songs that bask in a genuine roots regimen and a sense of timeless tradition,” and revered tastemaker station WFUV said, “This is a band that must be heard to be believed!"

“These powerful and strong influences for our band bring spiritual energy to our shows," says co-founder/guitarist Nick Russo. “My musical life has always been surrounded by an eclectic combination of unique musicians and scenes. So naturally, this band is a melting pot of many different cultures, genres, instruments, and sounds. My dream is that people of all races and origins live, play, and share all our different world musics and cultures together as one united race, without fear— one love!”

Although the band’s debut featured an “unfailingly high-spirited” mix of traditional fare culled from various cultures, the new nine-track opus showcases mostly original material. The one cover included is a lively rendition of “A Hundred Miles," the rollicking fiddle-fueled train tune from the 1800s. The other eight songs were penned by vocalist/co-founder Betina Hershey, who says, “Songs are always pouring out of me. Some I catch, and some slip out past my lips and float away. With the help of a cast of music mates, these songs linger so beautifully, with textures that I hadn’t even imagined.”

Highlights of Get Us Out Of Fearland include the playful 1920s verve of “I Don’t Need No Glasses,” the warm lilting embrace of “I Wish The World Knew Why,” the organ-driven, gospel-tinged “Dandelion” (featuring special guest vocalists, Stephanie Rice and Charenee Wade), and “Soar,” an inspirational song filled with optimism, determination, and perseverance.

These qualities sail skyward throughout the 25-minute journey, but none more so than on the boisterous groundbreaking title track, which features improvisational vocalist Miles Griffith, known for his work with Wynton Marsalis, Max Roach, Paul Simon, and Reggie Workman, and percussionist/vocalist, Dr. David Pleasant, a singular talent who has performed with Wynton Marsalis, Cecil Taylor, and Paul Simon.

Banjo Nickaru & Western Scooches will celebrate the release of Get Us Out of Fearland with a hometown show at DROM on Thursday, June 14. Joining Russo and Hershey on stage are percussionist Emiliano Valerio, pianist Art Hirahara, fiddle player Kenny Kosek, drummer Harvey Wirht, and special guest vocalists Stephanie Rice and Miles Griffith.

Opening the evening will be Devon, a 22-year old singer-songwriter who is readying her new EP, Songs From The Back Of A Bar, and actor Rob Morrow, known for his nuanced acting on hit shows Northern Exposure (which garnered him three Golden Globe and two Emmy Award nominations), Numb3rs, Billions, Entourage, American Crime Story: The People Vs O.J. Simpson, and Designated Survivor, and films including Mother, Flint, The Bucket List, and the Academy-Award nominated Quiz Show. Morrow is making a special appearance in NYC to promote the release of “The New, New Face," the debut single from Rob Morrow Band, due June 15. Advance tickets are available for $10.