Bang on a Can Big Birthday Giveaway: Download new double album FREE for first 25 days of 2012 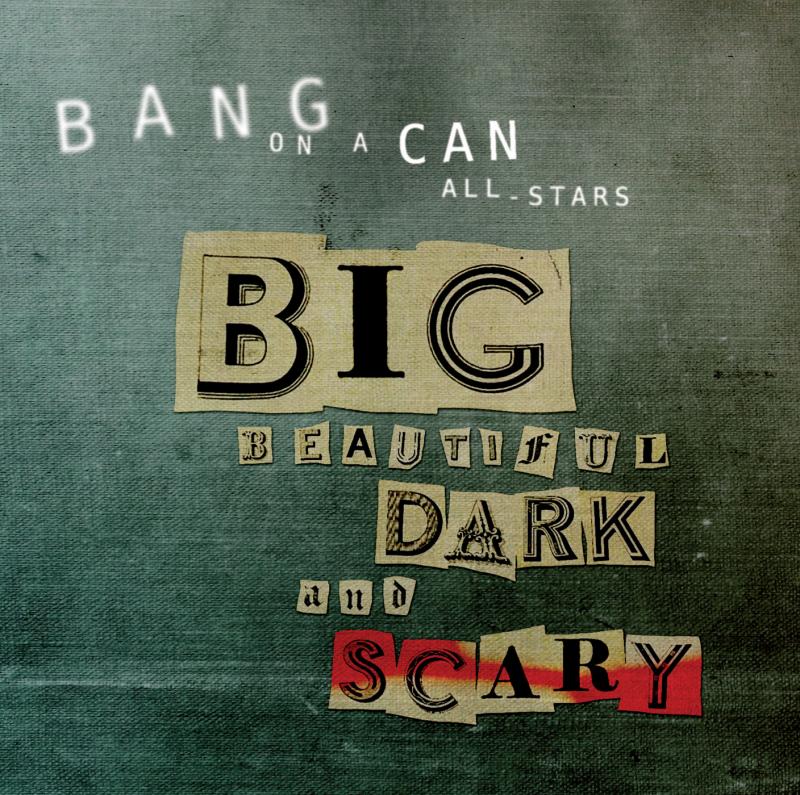 Bang on a Can celebrates turning 25 with a very special gift: Download the new album for free during the first 25 days of January in exchange for a Bang on a Can memory or photo at bangonacan25.org.

New York, NY—The Bang on a Can All-Stars have recorded their first studio album in five years, for release on Bang on a Can's sister-label Cantaloupe Music in 2012. The album, Big Beautiful Dark and Scary, is also the first to include the All-Stars' current line-up: Ashley Bathgate, cello; Robert Black, bass; Vicky Chow, piano; David Cossin, percussion; Mark Stewart, electric guitar; and Evan Ziporyn, clarinets. In celebration of its 25th birthday, Bang on a Can is giving a very special gift to the public. The complete, double album will be available to download for free during the first 25 days of January (January 1-25) from bangonacan25.org. In exchange, listeners need only share a memory, thought, story, or photo of Bang on a Can from the last 25 years, to be displayed online. The result will be a scrapbook of memories not just from those closest to the organization, but from the many people worldwide that Bang on a Can has touched over the years. And those new to Bang on a Can can still get the free download.

With Big Beautiful Dark and Scary, the Bang on a Can All-Stars show off their blazing speed, polyrhythmic virtuosity and all-world versatility in a return to the core Bang on a Can sound— an uncategorizable supermix of classical and electric instruments that is part classical ensemble, part rock band, and part jazz sextet. The album is the first in a decade that features the All-Stars exclusively, rather than as part of a collaborative project. Each of the pieces on the double-CD calls upon a different kind of virtuosity, demonstrating the range of musical abilities and experiences arguably unique to this ensemble. Recorded in New York City, all of the music on Big Beautiful Dark and Scary (including the arrangements of the works by Conlon Nancarrow) were written for and premiered by the Bang on a Can All-Stars.

The album features Four Player Piano Studies by the legendary recluse Conlon Nancarrow, who lived most of his adult life in Mexico City. To escape the limitations of human performance, Nancarrow wrote much of his music for player piano, resulting in music that is nearly impossible for live performers. For the Bang on a Can All-Stars, the key word here is “nearly." In fact, the Bang on a Can All-Stars have been championing a number of these studies in breathtaking arrangements by Evan Ziporyn that bring out the music's extreme, machine-like, rapid fire rhythmic layering alongside Nancarrow's bluesy, boogie-woogie feel.

Big Beautiful Dark and Scary's title track was written by Julia Wolfe. Wolfe, who lives ten blocks north of where the Twin Towers stood, captures the feverish post-apocalyptic feeling of living in the wake of 9/11 with an ominous sonic wall of sound that has the Bang on a Can All-Stars playing at full throttle. For the premiere in April 2002 Wolfe wrote, “This is how life feels right now."

David Longstreth contributes three new works to this album: Instructional Video, Matt Damon, and Breakfast at J&M. Longstreth, who, like Kate Moore, was a composition fellow at the Bang on a Can Summer Music Festival at MASS MoCA, captures the off-beat quirkiness that he has come to be known for as the mastermind of indie sensation Dirty Projectors.

David Lang's sunray weaves interlocking melodies in and out of focus like a slow moving kaleidoscope. While staring at the abandoned SUN dry cleaners in North Adams, MA, Lang remembered a description of the Washington monument as an attempt to transform a shaft of sunlight into a solid object. sunray floats and wafts until, suddenly, it turns the corner, and the music becomes much more solid.

Life according to composer Louis Andriessen, is “a kind of contemporary Pictures at an Exhibition," and is accompanied by four short films by Dutch video artist Marijke van Warmerdam (video included on the physical release). Delicately scored, moody and melodious, Life is a major new piece by this great Dutch composer. These four short works combine the subtle beauty of French harmonies with the pulsating energy of American minimalism.

Michael Gordon's shimmering For Madeline follows the trajectory of a rising and falling melody. Pulsing vibraphone and piano chords glisten in the background as a slithering hypnotic tune spirals forever upwards. Contradictory musical ideas and rhythms are locked together in a way that feels always on the verge of coming completely together and at the same time on the edge of falling apart. The tension created is both mesmerizing and heartbreaking.

Bang on a Can All-Stars' founding member Evan Ziporyn contributes Music From Shadowbang, three selections from his theater piece Shadowbang, which fuses the All-Stars' 21st century sound and Ziporyn's decades-long love affair with traditional Balinese music and culture. The range of this piece—in orchestration, volume, and pacing—is vast, and it moves seamlessly from the wispy and intimate to the blunt and hard rocking.

Kate Moore's Ridgeway was inspired by the ancient path of the same name that runs through Southern England. For 5000 years this path was a religious and commercial superhighway, running through such sites as Stonehenge and Avebury. Moore's piece adds stuttered, propulsive rhythms on top of each other, creating an almost archeological density of musical layers and activity.

Bang on a Can's 25th year includes performances around the world featuring a broad selection of brand new musical adventures alongside a recommitment to acclaimed projects from past years. The Bang on a Can All-Stars tour to Boston, Los Angeles, Chicago, Amsterdam, Bordeaux, London, Moscow, Glasgow, and many other places throughout the U.S. and internationally. Projects for 2011-2012 include the All-Stars in a dizzying array of collaborations with friends old and new—joining forces with Norwegian superstars Trio Mediaeval (in Julia Wolfe's Steel Hammer); with percussion legend Steven Schick (in an evening of music by Steve Reich in Los Angeles's Disney Hall, featuring 2x5 and Music for 18 Musicians); with an all-new expanded live tour of Brian Eno's ambient classic Music for Airports; and with a host of composers, visual and sound artists (in the premiere at The Barbican in London of a new evening-length touring project, Field Recordings&#151a collaborative program created from found sounds, images, and voices). The season also includes the premiere of a newly staged show featuring the exceptional marching band Asphalt Orchestra. See concert schedule at the end of this press release.

Since its creation by composers Michael Gordon, David Lang, and Julia Wolfe, Bang on a Can has grown from a one-day New York-based Marathon concert (on Mother's Day in 1987 in a SoHo art gallery) to a multi-faceted performing arts organization with a broad range of year-round international activities. In addition to its 25th year, Bang on a Can is also celebrating the 20th year of the Bang on a Can All-Stars; the 15th year of its membership- based commissioning arm, the Peoples' Commissioning Fund; and the 10th year of the Bang on a Can Summer Music Festival at MASS MoCA, a professional development program for young composers and performers which connects the pioneers of experimental music to the next generation. Each new program evolved to further expose innovative music as broadly and accessibly as possible to new audiences worldwide.

“When we started Bang on a Can in 1987, in an art gallery in SoHo, we never imagined that our one-day, 12-hour marathon festival of mostly unknown music would morph into a giant international organization dedicated to the support of experimental music, wherever we would find it," write Bang on a Can Co-Founders Michael Gordon, David Lang and Julia Wolfe. “But it has, and we are so gratified to be still hard at work, all these years later. The reason is really clear to us—we started this organization because we believed that making new music is a utopian act, that people needed to hear this music and they needed to hear it presented in the most persuasive way, with the best players, with the best programs, for the best listeners, in the best context. Our commitment to changing the environment for this music has kept us busy and growing for the last 25 years, and we are not done yet."

About Bang on a Can