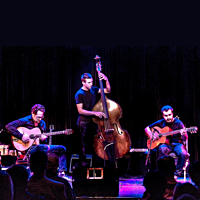 Ultrafaux and Hot Club of Baltimore are comprised of the same core members: Harris and Sami Arefin trade positions on lead and rhythm guitar. Eddie Hrybyk (pronounced RYEbik) plays bass. Both bands have released two albums with a third in production. In 2016 contemporary trio Ultrafaux released Deuxième; the more traditional Hot Club of Baltimore released Coquette. Winter Tour audiences will be treated to new tunes by both entities!

The groups have played countless concerts, earning abundant press. Says Tom Cole of Pacifica Radio’s WPFW, “These folks can handle the complexities and breakneck speeds of Roma swing…we can come close to the experience of what it must have been like to hear Django Reinhardt play...in 1937.” Says Sam Sessa of WTMD Radio, “Ultrafaux breathes new life into jazz, while holding onto the sense of nostalgia that makes this genre so timeless and appealing in the first place.”

In the U.S. the musicians have toured both coasts and points in between playing clubs, concerts and festivals. They’ve appeared at Django by the Sea, The Midwest Gypsy Swing Festival, Baltimore Jazz Fest and the Django Jazz Festival. Harris is artistic director and founder of the latter sellout event. The Second Annual Django Jazz Festival takes place at Creative Alliance in Baltimore February 24 and 25 in 2017. The groups have also performed in Montreal and are planning their first European tour.

Harris studied with guitar with Rick Whitehead in high school and Jack Petersen at North Texas State. He performed in D.C. with popular Latin Jazz group Bossalingo and moved to Baltimore in 2006 and turning his attention to gypsy jazz in its many forms.