SOURCE: ALL ABOUT JAZZ PUBLICITY
November 8, 2007
Sign in to view read count 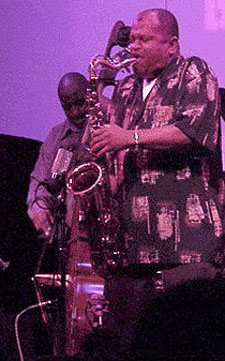 slideshow
Los Angeles, CA, November 6, 2007 - The Los Angeles' Jazz scene historically can be labeled as Classical and Eclectic. Native Angeleno, Azar Lawrence has truly been a major contributor to the West Coast music landscape beginning in the early 70's.

Known for arranging, composing, and playing for McCoy Tyner, Elvin Jones, Earth Wind & Fire, and as a major performer on countless productions; specially noted his 1978 performance with Miles Davis Live at Carnegie Hall where the album Dark Magus, was recorded.

Having collaborated with countless notables, Azar is emerging as a front man; his playing style is often defined as Coltranesque. However, Azar has been a Composer/Arranger in his own right of America's music in the Pop, Funk and R & B genres for decades, though never veering far from Jazz. Azar trained in Classical music as a youth and Classical Jazz beginning in his early teens, and as a young adult; considers himself a Disciple of Jazz, 'The Music.'

For Koko, Molongo, and Truth, are three of his latest works. Azar Lawrence is a construction hand on a bridge that is sure to endure forever in time. His mastering of Coltrane's Songbook, has taken him to celestial heights, causing him to be in a constant creative state as he gains an 'understanding' of Coltrane's music. Azar is composing, arranging, and naturally playing, soon will release a new CD, titled, A New Revelation.

Straight Ahead, Be-Bop, Jazz in the real lives on. Azar Lawrence performing music from his CD, A Tribute to the Legacy and Music of John Coltrane, and never heard before arrangements, astounds audiences, and consistently has received outstanding reviews.

The Azar Lawrence Quartet - Azar Lawrence, Tenor & Soprano Saxophone, Nate Morgan - Piano, Trevor Ware - Bass, and Fritz Wise - Drums, will be performing Azar's new compositions, (never before heard by the public) from his soon to be released CD, A New Revelation, at: