AXIOM is a dynamite little fusion band that will knock your socks off.
&#151Chuck Berg, Jazz Times 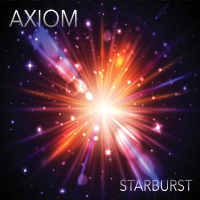 Axiom, the jazz fusion group founded by brother Pete and Phil Templer, will release Starburst, their first album in over a decade, on August 21.

On Starburst, Pete (guitars) and Phil (drums and percussion) are joined by an incredibly eclectic group of stellar musicians—Alan Palmer (Jackie Mclean, Bap Trio) and Frank Villafranca (Bill Watrous) on sax; Jared Stewart (Shadowfax) on keyboards; Bill Owen (ORN, Pell Mell) on bass and synth; Grammy- winner Hussein Jiffry ( Herb Alpert, Sergio Mendes, Chaka Khan, Steve Winwood); and Brian Mastaski and Keith Hubacher (Frankie Valli, The Beach Boys) on electric bass. Why so long between releases? “Partially it was because we became disillusioned with the lack of direction in progressive music,” says Phil. “But mostly it was because we all just got involved with other projects. When we decided to go back into the studio, we wanted to create something new or different that musically pushed forward. I really think the new compositions have a more Progressive Rock edge while still representing the culmination of our diverse musical influences, fusing jazz, Latin, and funk into what we call Contemporary Jazz Fusion.”

The album’s nine tracks were written by Pete and Phil, who have been composing together for decades, drawing on their varied musical influences and experiences. Those influences range from Jr. Walker and James Brown to the Allman Brothers Band and Jimi Hendrix, as well as Miles Davis, Wes Montgomery, Charlie Parker and Antonio Carlos Jobim.

Featured throughout the album is Pete’s creative use of his extensive palette of guitar sounds from the modeling and synth modules that enable him to create a multitude of sounds and textures. Phil’s use of both electronic and acoustic percussion instruments provides a unique, dynamic rhythmic drum performance and landscape.

The album’s energetic opening track, “Vaporware,” will be familiar to fans who have seen the band live, as they use it to open many of their shows. Axiom’s newest song is the multi-textured Afro/Jazz/waltz, “Indigo Wave,” its Latin vibe continuing on “Magunda,” which feature Grammy-winner Hussein Jiffry on bass.

The California Suite consists of four songs, or movements: “Kings Canyon,” “Mountain Dream,” “West Coast Encounter,” and “Deserts,” all inspired by the Templers’ love and respect for some their adopted state’s most iconic landscapes.

“When I first visited California back in the seventies, I was just blown away by the incredible landscapes, so much so that since I moved here I have spent extensive time in the High Sierra backcountry,” says Phil. “I’ve backpacked and trekked hundreds of miles through many wilderness areas. These songs, in a way, take me back to those experiences.”

“Starburst,” the title track, is a high-energy sprint, which features the melodic fretless bass work of Bill Owen. Phil’s inspiration hearkens back to “Fred,” a track from one of the great drummers of all time, Tony Williams on his Believe It album. The album closes with the earthy stomp “Cruising Altitude.” The definition of axiom is “a statement or proposition which is regarded as being established, accepted or self-evidently true.” That self-evident truth in both concept and execution best describes Pete and Phil’s over-arching musical objective. “There's that certain spark of creative spontaneity inherent in all of the music we love and that's what I'd like to think we're achieving in AXIOM,” says Phil. “There's a strong element of teamwork here as all the players get the chance to really be involved from performing as well as from a compositional standpoint". On Starburst, the brothers have once again have reached that goal, delivering a powerful collection of songs with wide-ranging appeal.

About Phil and Pete Templer

Pete Templer was exposed to a broad range of musical styles as he grew up, from big band jazz to classical and pop. He began to study piano at 7, turning his attention to the guitar after receiving a guitar for a 12th birthday present. He attended Berklee College of Music, transferring to the University of Miami to enroll in the renowned jazz program, where he studied alongside musicians such as Pat Metheny, Steve Morse, and Hiram Bullock. After earning his degree in composition and performance, Pete signed on as a staff writer, arranger and recording artist with the then-new label Solar Records.

That family interest in music also encouraged Phil to begin to study piano and drums at the age of eight. At twelve he moved on to study with longtime Louis Bellson protégé Gaeton Caviola. The brothers’ move westward has kept Phil busy recording and performing in a variety of situations and locations, from Las Vegas showrooms to some of L.A.’s premier clubs and studios.

Axiom has shared the stage with The Rippingtons, Larry Carlton, Lee Ritenour, Tom Scott, Uriah Heep, and Jon Anderson of Yes, among others. Their two earlier albums, Spirit of Light (1988, Cexton Records) and Tests of Time (2000, Orchard), garnered excellent reviews from Jazz Times, which called them “a dynamite little fusion band that will knock your socks off,” and Downbeat, which praised Pete’s guitar playing, saying “He propels tunes with choppy funky riffs, blows into overdrive for blues-rock assaults…” In a review of an early live show, Music Connection’s Scott Yanow, who said “AXIOM features strong originals, funky grooves and excellent solos from its leaders...AXIOM looks like it has a strong future."