There aren’t many real triple threats in the world. My late husband (Gene Kelly) was one. It was so refreshing to see and hear you on the stage and to confirm that there are indeed more incredibly talented men on the horizon who can sing, dance, and act. --Patricia Ward Kelly 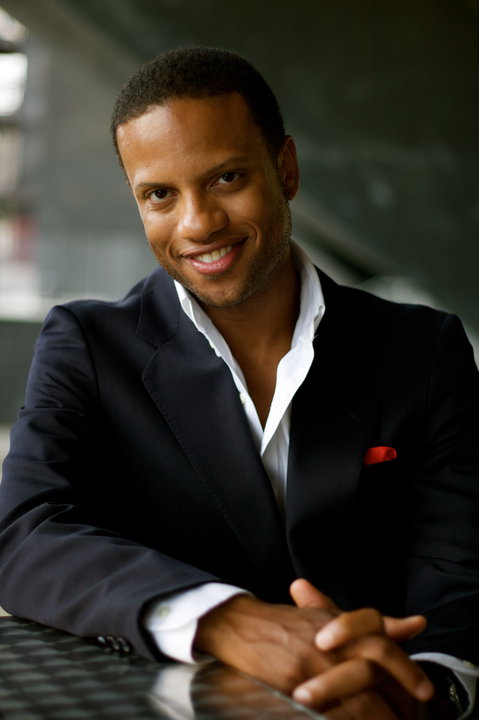 Long-dedicated to upholding and aligning himself with the first class carriage and aesthetic of timeless entertainers from the past, singer/actor/dancer Elijah Rock is in the final stages of preparation to bring a contemporary and decidedly African American twist to the music of George & Ira Gershwin with his forthcoming recording project, Gershwin for the Soul.

Cleveland-born NAACP Theater Award-winning triple threat Rock is sailing into the studio on wings of glowing reviews for his stage performance of the character ‘Crooner’ in “Words by Ira Gershwin.”

The Glendale News raved, “Baritone Rock, with charm to spare, shifts smoothly from crisp jazz phrasings to the operatic...” The Hollywood Progressive proclaimed, “The youthful Rock, who appears in Showtime’s TV series Masters of Sex is establishing himself as one of his generation’s foremost interpreters and performers of The Great American Songbook, which Ira Gershwin contributed so much to...”

Elijah Rock began singing at age 13. Three years later, he was already singing Gershwin songs from “Porgy & Bess.” An alumnus of The Cleveland Institute of Music, Rock was not only steeped in musical theater, art song and the classics, they swiftly became his passion. Rock states, “I once asked Quincy Jones during a program at UCLA, ‘Why aren’t there more brothers doing traditional stuff? He said, ‘Well, I guess it’s you, brother.’”

Rock – whose resume boasts a decade and a half of acclaimed across the board accomplishments in stage, film and television—understands that for the success of his musical mission long term and for Gershwin for the Soul immediately requires a delicate balance of tradition in a contemporary context. He found the perfect collaborator in music veteran Kevin Toney whose work as a keyboardist, composer, arranger, author, educator and co-founder of the '70s R&B Jazz group The Blackbyrds provides the optimal springboard for Rock to bounce concepts off. They first worked together with Toney as the Musical Director of “Words by Ira Gershwin.” Now they are molding key arrangements of Toney’s from that stage production to make the classics modern all over again.

“Kevin Toney is a virtuoso and an award winning musician whose experience speaks for itself,” Rock says. “I trust him with a project that has to meet a certain standard. Kevin’s arrangements for ‘Words’ don’t come off as show tunes. We brought our authentic creative selves to the material and, in that, it became uniquely ours.”

“I had such an intimate experience with Kevin along with bassist John B. Williams, drummer Greg Paul and guitarist Terry Wollman. We spent two months working everything out for the show. And now we’re tailoring choice material for my new album.”

Elijah Rock’s Gershwin for the Soul will be filled with flashy perennials such as “Fascinatin’ Rhythm,” “Shall We Dance,” “I’ve Got Plenty of Nothing,” “Long Ago and Far Away,” “They All Laughed” and “How Long Has This Been Goin’ On.” However, it is ballads like “Isn’t it a Pity” and “Love Walked In” in which the fuller, richer measure of Rock’s voice will be revealed anew.

“Before this experience, I hadn’t really embraced the balladeer aspect of my gift,” Rock muses. “It was about me being vulnerable enough to know I could do it. It’s been an interesting transformation for me.”

Rock hopes to woo singer Cecile McLorin Salvant a kindred spirit in the revival of timeless vocal style (popular for her rendition of Bert Williams’ early 1900’s song, “Nobody”) to sing a duet. An additional bonus will be one original composition of Rock’s entitled “New York City Springtime,” a mid-tempo swing tune about a guy flying back into town with more swagger than he had when he left with his sights set on the girl he never had the guts to talk to…until now.

Ultimately, Elijah Rock will be wowing longtime lovers of Gershwin music while hopefully cultivating a younger audience with his singing and paddle-n-roll style of tap dancing – lost arts all that have found in Rock a tireless cultural savior.

“I believe there is a cross demographic that this music will serve,” Rock concludes. “I am grateful to Tony Bennett and Lady Gaga for their success in keeping the music relevant to today’s pop world. Uncanny as the pairing may seem, its working.

“I approach singing from a traditional perspective with a fresh twist Gershwin for the Soul not only represents America’s classical music, it will give me a platform to address a lot of other things about the culture and where we all stand today.”

Gershwin for the Soul will be available Spring 2016.