Award-Winning Triple Threat Entertainer - Elijah Rock - Is Jazzin' Up Gershwin On Record With "Gershwin For My Soul" - Release Date: April 18

I approach singing from a traditional perspective with a fresh twist. 'Gershwin For My Soul' not only represents America's classical music, it will give me a platform to address a lot of other things about the culture and where we all stand today. --Elijah Rock 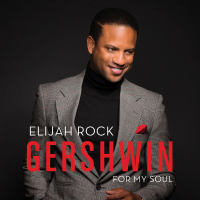 Long-dedicated to upholding and aligning himself with the first class carriage and aesthetic of timeless entertainment, singer/actor/dancer Elijah Rock is carrying the blazing torch for the legacy of George & Ira Gershwin, bringing a contemporary and decidedly African American twist to their timeless music with several forward thinking projects.

Gershwin For My Soul (release date April 18) is the Cleveland-born baritone's brand new critically acclaimed album. Jazziz magazine marvels, “Rock brings both chops and emotion to his masculine yet sensitive delivery." Rock travelled to Thailand to star and make his directorial debut in a gorgeous music video for the lead single/title track “Gershwin For My Soul" that is bringing a sensual touch of class to video outlets around the globe. Rock and his lovely co-star cavort in the sun- dappled climes and evening breezes of Phuket interspersed with Elijah crooning about the timeless grace of Gershwin and sumptuous amour- thus Elijah's new moniker, “Mr. Romance."

It is but one of 12 masterful performances on the album, produced and arranged by Grammy-winning keyboardist/musical director Kevin Toney to bring the music of Gershwin into its rightful contemporary space, ably aided by bassist John B. Williams and drummer Greg Paul, plus guitarists Jacques Lesure and John Storie. The arrangements range from hiply syncopated updates on “Fascinating Rhythm" and “Our Love is Here to Stay" to Rock milking the rarely heard extended introduction to “How Long Has This Been Going On?" (before it falls like feathers into a soft brushed blues) and a version of the delightful “S'Wonderful" in a tender take that recalls the spirit of recently departed Al Jarreau. The album represents a full circle journey for Rock who started singing at 8 in church followed by his first Gershwin songs from “Porgy & Bess" at 16 at the Cleveland Institute of Music.

That connection is key to Elijah Rock reviving the music of “Porgy & Bess" in a revolutionary new presentation that takes what was originally written as an Opera then turned into a Broadway musical into a pure jazz adaptation. Utilizing the story as retold in the most recent Broadway book written by Suzan Lori Parks, with Kevin Toney's sparkling arrangements for 5-piece band and Rock in the role of “Porgy" with a scaled down cast, this “Porgy & Bess" premiered at the 300-seat Ensemble Theater in Santa Barbara, California to raves from audiences bowled over by the intimacy, the freshness and Rock's mastery.

NAACP Theater Award-winning triple threat Rock sailed into these latest endeavors on the wings of glowing acclaim for his stage performances of the characters 'Crooner' in “Words by Ira Gershwin" and of the legendary Cotton Club star Cab Calloway in the musical revue “I Only Have Eyes For You" for which he was nominated for a 2016 Ovation Theatre Award. The Glendale News raved, “Baritone Rock, with charm to spare, shifts smoothly from crisp jazz phrasings to the operatic..." The Hollywood Progressive proclaimed, “The youthful Rock, who appears in Showtime's TV series 'Masters of Sex,' is establishing himself as one of his generation's foremost interpreters and performers of The Great American Songbook.

Up next for Elijah Rock is a residency in Las Vegas where a top team of producers are developing a vehicle around the star entitled “A Fine Romance" featuring The Songs of George & Ira Gershwin and The Great American Songbook. In this intimate show, Rock will flesh out the “Mr. Romance" in a theatrical environment that promises to bring back to Vegas the taste and sophistication of yesteryears.

“Before this experience, I hadn't really embraced the balladeer aspect of my gift," Rock muses. “It was about me being vulnerable enough to know I could do it. It's been an interesting transformation for me." Ultimately, Elijah Rock will be wowing longtime lovers of Gershwin music as he cultivates a younger audience with his all-around showmanship, singing and even his paddle-n-roll style of tap dancing- lost arts all that have found in Rock a tireless cultural savior.

“I believe there is a cross demographic that this music will serve," Rock concludes. “I am grateful to Tony Bennett, Cecile McLorin Salvant, Gregory Porter, Diana Krall and Michael Buble for their success in keeping the music relevant to today's pop world. I approach singing from a traditional perspective with a fresh twist. Gershwin For My Soul not only represents America's classical music, it will give me a platform to address a lot of other things about the culture and where we all stand today."