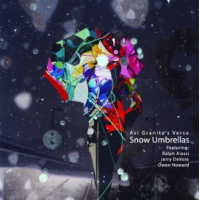 slideshow
A NEW VOICE IN JAZZ

AVI GRANITE PRESENTS HIS LATEST RELEASE AS A LEADER

Canadian-born Avi Granite is a young guitarist, composer, improviser and educator who has already performed extensively across North America and Europe. He was a grant recipient from the Canada Council for the Arts and awarded with a composition residency at Banff Centre for the Arts.

Granite was invited to be part of the Rising Stars series at the Montreal International Jazz Festival and has written various compositions for feature films. He possesses a prestigious New York University masterʼs degree in music performance, and held an adjunct position on the faculty. Granite has released two CDs to critical acclaim. The multi-talented Brooklyn resident continues to explore new horizons.

Snow Umbrellas is a modern audio-film referencing many scenes from Graniteʼs life over the past few years. He describes his music as a conscious effort to communicate with the audience, while engaging his musicians in a challenging way. “To me itʼs the continuation of the evolving quality of the jazz tradition," says Granite. “We are improvising on written material, sometimes in more traditional ways, sometimes in very modern ways. The variety and spur of the moment element in the project is what allows the audience in. They can hear us communicating and reacting to each other. I believe the audience has a pallet for this music - as free as some of it may be, if you listen, youʼll get it."