It's not just Mason's combination of fluency and forcefulness though, that sets him apart. Deluge is directly from the soul, unfiltered by pretension.
—Lloyd Saks, Chicago Sun Times 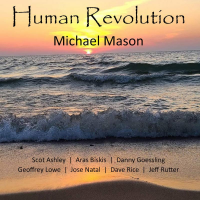 The eight song compilation, a Jazz/world fusion/rock project composed/arranged/orchestrated and performed by Mason, with his long time band of gifted musicians. It is his most Exciting release to date.

From the heartfelt tribute to the late Bill Evans in “Evans Peace" to “Cascade," a groovy percussion based piece that has Mason floating on top of the musical notes with an elegant ease; to the tribal musical sounds in “Gates to Raga," will be released April, 2021.

Human Revolution will be available for purchase on iTunes.com, iHeartRadio, Deezer and various outlets worldwide. Physical CD's are available to purchase on Amazon.com.

All compositions written by Michael Mason

Mason's previous recording, Angels of Fire project, from Southport Records, was released in 2000, and was dedicated to the (92) students and (3) catholic nuns who perished in the tragic “Our Lady of the Angels” Catholic School Fire on Dec 1, 1958 in Chicago were Michael was a first grade student He is one of five students from “Our Lady of the Angels” who became a FireFighter/Paramedic and has served for close to 4 decades years, with years as an Instructor at the Fire Academy. Now retired as a Lieutenant with the Downers Grove, Illinois Fire Department, Michael's passion for creating music in the Jazz/World Fusion/Rock genres has become his focus after a career he's extremely proud of. For additional information on Michael's firefighter career, go here.

Michael Mason is one of the Chicago area Fire Fighters who went to New York City just days after the destruction of The World Trade Center Towers to help his fallen brothers, many of these first responders from across the USA are now deceased from the toxic chemicals that were transmitted in the air after the attack by a foreign enemy. In addition, he provides teaching support to the cast of characters on the Hit NBC TV show Chicago Fire; and the movie; Batman V Superman. As a highly skilled, sort after musician, Michael has appeared with James Newton, Ian Anderson, Edward “Kid” Jordan, Chicago’s legendary Fred Anderson owner of the Velvet Lounge and acclaimed flutist, James Galway and with some of the most talented jazz musicians in the Chicago area. Michael's long time musical influences are James Newton, Miles Davis, John Coltrane, Eric Dolphy, Sun Ra, Yusef Lateef and the AACM (Association for the Advancement of Creative Musicians).

Mason's recordings have been heard worldwide on Jazz and College stations. In addition, Michael has performed at many Jazz Festivals around the world, while also appearing at NACA (National Association of Campus Activities) Regional and National Convention Mainstage and Performing Arts stages. His credits include being a special guest at Artist-In-Residency Programs, presenting Clinics/Workshops at various Universities nationwide; teaching private students improvisation; while also appearing as a guest musician on various other Artists recording projects. His passion for sharing his musical gifts keeps him available for all musical possibilities.

What the Critics are Saying

“The music flows and while the solos are important.... technically excellent, the disc succeeds because there is such a consistent blend of melody solos,and rhythmic drive. Most of these players are new names to me and I can't wait to hear all of them again. Deluge holds up to repeated listenings." —Richard B.Kamins, Cadence

“Mason, a flutist, plays in thoughtful yet propulsive fashion similar to the way Rahsaan did. A freewheeling spirit pervades, though the material is definitely well thought-out." —DK, JazzTimes

“It's not just Mason's combination of fluency and forcefulness though, that sets him apart. Deluge is directly from the soul, unfiltered by pretension." —Lloyd Saks, Chicago Sun Times.

Human Revolution is the first CD release from the Illinois based record company, AVG. We are honored to release this exciting recording from the gifted musician, Jazz Flutist Michael Mason.